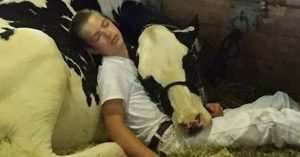 There’s nothing like a cowboy and his heifer. 15-year-old Mitchell Miner, while young, was already eager to enter the youth dairy cattle show at the Iowa State Fair with his cow, Audri. The two had practiced for a total of two months and stayed up until 3 a.m. the past three days to prepare for the show. It was a lot of responsibility, but it was Mitchell’s job to clip, bath, lead, walk, and generally care for his heifer.

Although Mitchell and Audri ended up in fifth place among seven other contestants, the duo agreed that they had put a lot of hard work into the competition and could celebrate with a little nap inside a barn. That’s when Mitchell’s father, Jeremy Miner, showed up and took a photo of his son, still in his uniform, curled up with Audri!

While the photo was later removed, it had received over 15,000 likes the following morning! Many hearts were melted by the sweet picture.

When asked about his bond with Audri, Mitchell told the Des Moines Register, “She likes to lay down quite a bit. I don’t really understand the bond with my animal either. She just enjoys my company.”

His mother, Laura, had a bit of a different answer: “I think it’s just when you spend that much time with them, they get really comfortable with you.”

Regardless of why Audri has become so close to her master, their bond is uber cute.

Sadly, Audri was borrowed from a Blairstown dairy farm and was sent back after the family took her to a final showing in September. Mitchell and his temporary heifer may have not been able to take the first place prize home, but there’s always next year! And with Mitchell’s parents’ farming background, I’m sure he’ll strive to make his mom and dad even prouder in future competitions if he chooses to participate in them.

In fact, while Mitchell’s parents no longer live on a farm, they both grew up on one. Since then, their values have still stuck with them.

“We learned a lot from the farm. We have those values instilled in us and we are trying to do what we can to preserve that,” said Mitchell’s father.

It looks like farming is in Mitchell’s genes too!

Check out the photograph of Mitchell and his heifer Audri below.