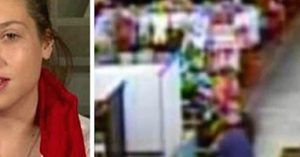 Sometimes, when an unimaginably frightening situation occurs, fate steps in and saves the day. In this instance, fate took the form of a local teenage girl, who acted on her recent CPR training and saved the life of an infant.

Imagine the terror this mother must have felt. She was shopping at her local Wal-Mart and notices that her 11-month-old baby is not breathing and is not responding. Panic quickly sets in and she tries everything to revive her child, but nothing is working. As we see from the security camera footage in the video below, a crowd begins to gather, but no one is able to provide any real assistance to the mother and child. A store manager makes the call to 911, but of course, there is the possibility that even the first responders will be unable to show up on time.

Fortunately, on this particular day in this particular Wal-Mart in Missouri, a young woman, 17-year-old Abby Snodgrass was shopping. She was in a nearby dressing room when she heard the commotion outside. She dressed quickly and made her way over to the unresponsive infant. As it turns out, in that entire crowd of people, teenage Abby was the only one who could actually help. A few months before, she had learned CPR in her high school health class. Many of us have taken CPR classes and certification, generally with the hope that we will never have to use it. Nervous, Abby put her valuable skills to the ultimate test.

“The one thing that crossed my mind initially was, ‘What if this doesn’t work?’ And I just had to push it out of my mind and keep going,” she told reporters.

Abby’s quick thinking and skill saved a little girl’s life that day. Thank goodness she was there!