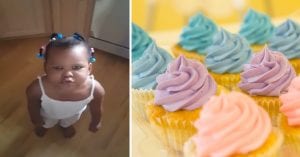 From an early age, most children love anything sweet and sugary. Pudding, vanilla ice cream, colorful lollipops, and chocolate chip cookies are some of the top choices for a child with a sweet tooth! I’ll admit it; I was the same way as a child. To be honest, I still am!

Some parents are hesitant to introduce sweets to their children too young for fear that their preferences in food will gravitate from a love for healthy veggies to mostly sugary treats. Whether a parent introduces sugar to their children as an infant or a little later in life, there’s no doubt that kids can’t stop at just one dessert. At some point, parents have to place the Halloween candy on a high shelf in the pantry and put the freshly-baked cookies in a tightly-sealed jar with a sign that reads, “Do not eat.”

For one daddio, he too had a child who was sugar crazy. After cupcakes were baked for the entire household, he should have known better than to leave the cooling cakes out in the reach of his young daughter. Better yet, Dad shouldn’t have run an errand while giving his little princess the opportunity to steal a cupcake or two…or three…or in her case, four!

After returning to the kitchen to discover multiple missing cupcakes, the father knew right away who the suspect was: his daughter. Rather than giving her a long, mean lecture or sending her to a gruelling session of time-out, this daddy had another idea in mind: friendly confrontation.

So, Dad began recording on his phone as he approached his daughter for more information.

“Are you aware that we have had several cupcake thefts?” he asks his little one.

The antsy yet honest girl replies, “Yeah! I had four.”

Once the girl admits that she’s the cupcake thief, Daddy doesn’t get angry. Instead, he tells her jokingly that she has to “go to jail.”

“No, you go to jail!” responds the little lady.

For the remainder of the adorable clip, the dad (the police officer) and the daughter (the robber) engage in a game of chase around the house. Their daddy-daughter bond is just too cute for words!

How would have you responded to your little one stealing cupcakes while you had your back turned? It’s so hard to refuse cupcakes to such a sweet face. Watch the adorable footage below with added music for even more laughs.