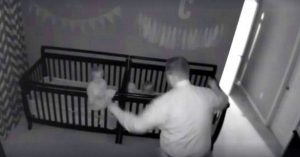 Waking up kids can go one of two ways. The first way – it can be a harrowing, dramatic experience. They don’t want to get up, they’re tired, sleepy, and just can’t be bothered to get the day started. The second way – they bounce out of bed, fully rested and bright eyed and bushy tailed, ready to get their day rolling.

The former is probably truer than the latter, but it’s all in the approach! Setting an alarm or walking in the room calling out your kids’ names are perfectly acceptable ways to wake them up. But, if you find yourself with a spare minute, then this pleasant wake-up call can go a long way!

Dad, Brian, from North Carolina, USA, has a knack for waking his kids up. Mom, Traci, has a baby cam set up in the room and caught this hilarious and wonderful footage one morning. Dad is totally oblivious to be being caught on camera, and that’s what makes this video even more heartwarming! It’s 6 am and it’s time for the household to get up. Dad has burst into his kids’ room, twin toddlers, and he’s got the music cranked. That’s right, instead of reaching over into their cribs and softly speaking their names or rubbing their bellies to wake up, dad’s got another idea in mind.

Brian is ready to go to work wearing his work clothes, but before he leaves the house, he’s throwing an early morning dance party. He’s got Bruno Mars “Uptown Funk” turned up as he two-steps across the room. One little sweetie is up, leaning against the crib, and seconds later, the other cutie pops up too! Dad yells, “Dance partayyyy!” and now all three of them are dancing and bopping around.

The babies are giggling and dad’s got his hands in the air like he just doesn’t care! But wait, he decides to kick it up a notch. Right at the bridge of the song, dad starts clapping, then goes over to turn on the lights, cueing in the kids (if they haven’t already) that it’s time to open their eyes and greet the day! He’s subtly woven in his real intention to get them up and moving while appearing to be the fun parent and throwing an impromptu party! The kids are loving it, and I’m sure after this, mom’s appointed dad to wake up the kids every morning!

Click the video below to watch this awesome dad work his magic.