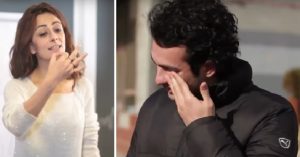 There’s no greater way to show someone you care about them than by going out of your way to do something that will make their lives easier and more convenient. In order to do this, we have to be able to empathize with them to see things from their perspective.

In a touching Samsung commercial, residents of Bagcilar in Instabul, Turkey did exactly this. They teamed up, learned the basics of sign language, and after a month’s worth of preparation, secretly filmed a deaf man named Muharrem to see how he’d react. The goal was to give Muharrem a day without communication barriers. If everyone else around him knew sign language, little things like buying food at a local shop and speaking to cab drivers would make a world of difference for him and make his day run ten times smoother.

To film the advertisement, dozens of cameras were set up, hidden so Murharrem couldn’t see. However, the residents were well aware of what was going on.

In the commercial, we watch as the Turkish man communicates in sign language with a man working at a bagel shop, a taxi driver, and even random people on the street who approach him first.

One of the best parts of the video was when a woman bumped into him and was able to apologize to him in sign language. This part of the commercial brings to light the fact that communication barriers can create misunderstandings. Imagine if the woman apologized verbally, and Murharrem wasn’t able to hear it and could only guess what she said based on the movement of her lips. Murharrem would likely have no way of knowing what she said: did she cuss at him or say something snarky? Something as minor as this situation can leave someone with a hearing impairment confused or even hurt if they assume the worst. However, with a closed communication barrier in the commercial, the woman was able to express through visual words that bumping into him was not her intention and that she’s sorry.

Coming to the end of the video, Murharrem is told by a Samsung representative about their goal of knocking down communication barriers, which he was pleased to hear about. They also told him that they’d now be servicing hearing-impaired individuals. To see the man cry tears of joy is enough to make your entire day!

While the commercial is clearly touching, after wracking up over 13,800,000 views since being posted in March of 2015, viewers had very different perspectives. Many were happy to see an advertisement geared around human kindness while others were distraught that Samsung was essentially “selfishly using a good deed to make profit.”

Here’s what one commenter has to say: “When I was younger I used to believe it was wrong for others to help people if they were doing it for selfish reasons as I felt it detracted from the good being done, but I changed my thinking (not because of this commercial), I don’t care anymore. I just want people to do good, I don’t care the reason. I’d rather people do good then not do anything at all.”

The previous commenter makes a great point. Although Samsung created this commercial as a way to advertise their products, as most commercials are designed to do, the company went above and beyond to create a meaningful commercial that would send a positive message to the public about being considerate of others. The emotional message of this advertisement is really what matters.

Watch the emotional Samsung commercial below!