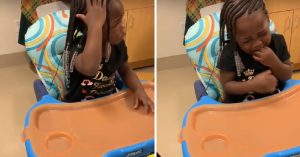 For those of us who are blessed with all five of our senses, we tend to take them for granted. Although we certainly don’t wish the loss of hearing, sight, touch, taste, or smell on ourselves or anyone for that matter, sometimes we don’t realize how difficult it would be to lose even just one of our senses. For those with a loss or impairment of at least one of their senses, life can be significantly altered. And when and if they’re able to regain that sense back via a certain medical procedure or form of treatment, it’s like night and day.

That leads us to the story of three-year-old Q’ela Pierce, who was born with a significant hearing impairment, which was discovered when she failed her newborn hearing screening. Naturally, her hearing did not improve with time, but there would be a light at the end of the tunnel. After discovering that hearing aids weren’t going to be useful for her case, she was eventually deemed a good candidate for a cochlear implant in January, which her parents agreed to opt for.

August 29th was the big day: little Q’ela underwent surgery at the Nemours Children’s Hospital in Orlando, Florida, to receive her implant. Then on October 3rd after a month-long healing process, her cochlear implant would be officially in working order.

Q’ela’s parents, Nikitia Vasser, 33, and Quaneef Pierce, 25, knew how emotional it would be to witness their sweet daughter hear for the first time, so they decided to capture her reaction on film.

In the video, Q’ela is playing with toys, not quite aware in regard to what’s about to happen. However, the second her implant is activated, we know right away when she begins to squeal and sob in disbelief! The second Q’ela hears her parents say her name, she’s so emotional that she immediately reaches over to give her momma a hug.

“Hey, you hear it? I know it. Yeah, you heard it?” one of her parents said in the video. It’s certainly an emotional moment for her parents as well!

While Q’ela is so young, so it’s difficult to know truly how she felt the moment she heard for the first time — scared, disturbed, excited — the doctors mention that her reaction was a positive one. It must be such a wonderful moment gaining a sense that you’ve never truly had.

It’s now been a month since Q’ela’s cochlear implant was activated. She now recognizes the sounds of her parents’ voices and various sounds of nature, but never will she nor her parents forget the first time she was able to hear!

Check out the stirring footage below to capture Q’ela’s entire reaction as she hears her parents’ voices!