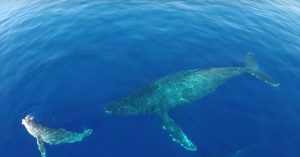 As you can probably recall from your science lessons growing up, the majority of our planet comprises water. Meanwhile, just about 29% of Earth’s surface features land. Interestingly, we haven’t even explored all of the crevices of our planet’s land, and of course, our waters.

In fact, according to the National Ocean Service, a whopping 80% of our salty waters have yet to be explored, observed, and even mapped. Due to this statistic, it’s clear that there are plenty of animal and plant species, and not to mention, underwater phenomena, that we have yet to be aware of. What a mysterious world we live in!

Even for those who have scuba-dived or went on a whale- or -dolphin watch boat tour, there are just some things that we don’t have the opportunity to witness at sea. That becomes apparent in Captain Dave Anderson’s incredible GoPro footage off the coast of San Clemente, California that he captured with his drone and shared with us.

Watching the video, we witness several dozens of splashes as numerous dolphins all travel in the same direction together via migration. What a beautiful piece of art! As the drone gets higher in the sky, we are able to see just how many dolphins there really are, which is easily hundreds if not thousands! To top it off, because dolphins don’t mass migrate at one time and tend to migrate shorter distances, being able to witness an occurrence like this is fairly rare, making it extraordinarily special to watch, let alone, capture on film.

We might think Captain Anderson already gave us a special treat, but then he provides us footage off the coast of Maui of a momma whale snuggling and playing with her sweet baby. The crystal clear waters and the camera pointing downwards make witnessing this special event possible.

Getting the opportunity to see dolphins and whales engaging in their day-to-day life when they think nobody’s watching brings to light just how fascinating these creatures really are. However, being able to film such footage was not easy, according to Captain Anderson.

“I drove the drone and the inflatable boat at the same time. Other times, my wife Gisele drove the boat,” he says. “I sank one drone during the making of this video when it nicked an antenna on the boat and sank faster than I could swim. Thankfully, I was able to get another.” Trust us, we’re thankful too!

The drone footage below is simply stunning. Be sure to give it a watch, and share it with your Facebook pals!