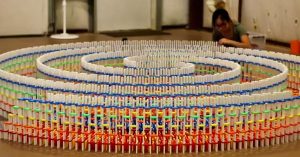 I’ve loved playing with dominoes ever since I was a kid. I think we’ve all had some kind of interaction playing with this entertaining stackable toy. I don’t know what it is about watching dominoes fall over but it’s so oddly satisfying. Ever since the first time I saw a handful of dominoes toppling into a chain reaction, I was mesmerized by the unique rhythmic pattern it created. Truth be told, I never learned how to actually play a proper game of dominoes (apparently, those dots aren’t just there for decoration). But for a short while, “dominoes” was of my favorite childhood games.

I stopped playing dominoes but I’d be lying if I said that I didn’t still get a kick out of watching highly elaborate falling domino chains. Now, I’ve seen some very cool ones but the one you’re about to see completely blew my mind.

If you’re seriously into falling dominoes, then you may have heard of a young lady who goes by the name of Havesh5. Havesh5 is a professional domino artist who designs and builds ever-so complex domino setups. So when Havesh5 releases a new video of her latest domino creation, people go nuts. Her designs are very elaborate and complicated and you can’t help but wonder how on earth she does it! How does she design it? This takes some serious skill that involves all sorts of thinking and engineering. This young woman has both a creative and analytical mind to be able to pull something off like this.

In “The Triple Spiral,” Havesh5 shows us what happens when a pro spends 25 hours (spread over 8 days), very meticulously stacking 15,000 domino pieces. Notice how intricate the layout is as the first domino is set off on the ground then it knocks every other one down before climbing onto the next level and then the following level after that – and it keeps going and going and going!

Over 17 million people have watched the video so far! Watch as she so carefully stacks each domino one by one. Imagine the pressure of not messing up, because it only takes one domino to set off the other 14,999. And that would be so heartbreaking to experience especially if you’re halfway done or close to the end of completing.

Catch the video below and prepare to be amazed! Let us know what you think and don’t forget to share this story with your family and friends.