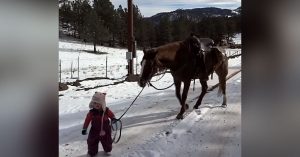 Even though some people claim that animals and humans are completely distinct from one another in terms of how they feel emotions and form relationships, evidence proves that this is not true. We’ve heard stories in the news of dogs risking their lives to wake up their sleeping owner when the house suddenly catches on fire. We’ve also heard stories of animals caring for other animals, even ones that are not their own species.

In fact, one viral video of a toddler named Emma Dunn walking her dad’s horse, Cinnamon, proves that animals can have the qualities that humans have, and thus, really can form special bonds with their human counterparts.

In the video, little Emma is bundled up in a thick, pink sweater with heavy overalls overtop and a light pink beanie on her head. The toddler confidently commands the way with Cinnamon trailing slowly behind her while she’s lightly pulling the lead rope attached the horse.

You can tell that Cinnamon obeys Emma’s every command. Even the moments that the horse stops, all Emma has to do is turn around, and the horse immediately gets the hint that the girl wants him to follow her.

This pair has me smiling almost instantly! The wobbling of the little girl walking in the snow and the gentle walk of the horse behind her, being very careful not to accidentally step on her, is incredibly cute.

At one point in the clip, the little girl stops off to the side of the path and slightly struggles with her grip of the lead rope with her winter gloves. She even accidentally lets go of the rope, but trusty Cinnamon knows that he isn’t supposed to take off. When he notices Emma struggling with the rope, the horse even bends down as if he’s trying to help her!

As the two continue their little walk, the horse remains loyal and calm. Even though Cinnamon is being walked by someone much younger than him, he definitely knows who’s boss.

The cutest part of this video is the patience that Cinnamon has for Emma. With her tiny legs and feet, she can’t walk as fast as the long-legged horse, so Cinnamon makes accommodations for her by changing his pace. Occasionally in the clip, the horse even rubs his head against the girl to show some affection and as if to say, “It’s okay, take your time!”

It’s clear that Emma has adjusted well to life on her father’s ranch and that she and Cinnamon will continue to share many more memories. Maybe one day in the future, Emma will be riding Cinnamon all by herself on that same snowy path!

Be sure to watch little Emma and Cinnamon’s bonding experience in the video below.