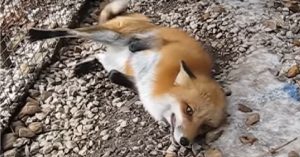 I don’t know about you, but I think seeing others happy is one of the best feelings in the world. I feel all warm and tingly inside when I see a child squeal in happiness when their parent gives them a toy, a pet perk up when they’re given a treat, or someone do a little happy dance when they get a text from their crush. We should be happy when others are happy, not bitter or jealous.

I know for a fact you’ll be happy when you see Chuckles the red fox and her cheerful response each and every morning! She might be an intimidating carnivorous animal in the eyes of many, but after a video was posted of her online recently, the rescued fox is stealing people’s hearts.

Watching the video, you’ll experience Chuckles going bonkers in the early morning as a woman comes to greet her.

“Hi Chuckles!” the woman says in a sweet voice. Meanwhile, the fox makes happy chuckling noises (it’s how she got her name) while rolling around and wagging her tail like a dog. She sure is happy! I’d say she’s a morning type of gal. Part of me wouldn’t mind keeping her as a pet at this point!

But later into the video, it’s clear that Chuckles is still wild at heart. She’s a bit jumpy and scatters away as the woman gets closer to her. It looks like she’s still adjusting to human interaction and, not to mention, her new environment.

Chuckles is currently a permanent inhabitant at the Treehouse Wildlife Center in Brighton, Illinois. (The wildlife center recently moved to Dow, Illinois where Chuckles has a brand-new, roomy enclosure.) Due to neurological problems, the fox is unable to live on her own in the wild. However, the rescue center is happy to have her as an addition.

Although the critter may not be “normal” when compared to other foxes, she definitely has a purpose at the facility. In fact, Chuckles occasionally fosters orphaned kits that arrive at the Dow center.

Plus, Chuckles is putting smiles on people’s faces around the globe.

Nevertheless, some viewers were concerned after watching. They assumed the behavior of Chuckles was not normal.

But an employee at the center has something to clear up.

“I can assure you that the behavior in this video is of her which she gets excited. She especially gets excited when we bring a bucket of food to her! She’ll even come running from the other side of her enclosure wagging her tail, chuckling, and rolling around,” they said.

“I do want to make a point though to say that she is still a wild red fox. We do not pet her because it is her rule! She has a personal bubble and prefers that we do not try to touch her. She would rather approach or greet us on her own terms and we respect that.”

With that clarification, it’s safe to say that Chuckles’s reaction is adorable, no doubt.

Your face will light up when you see the fox’s good morning routine below! Isn’t she just the cutest?