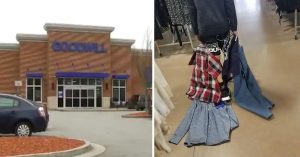 cike 1 year ago
I think the mother just did that not because he needed clothes but to show him how it feels to have to wear used clothes. It was a good lesson learned.
My daughter & ther friends that I considered mine always wanted new clothes until I told them they could each have xanount to spend on clothes. They could either buy new or shop rummage sales. They learned rummage sales w/used clothes were great. They've continued to do that & they're in their 40's
0 Reply
View 1 more comment