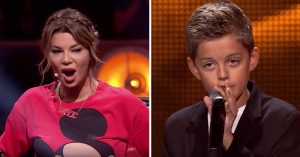 It always blows me away to watch kids steal the show! How some fearless tweens can just step on stage, in front of a huge audience, and judges who are solely there to pick them apart is beyond me! You gotta have tough skin to compete on a talent show like “The Voice Kids Poland.” And then have it aired on TV for the world to see, put up on the Internet for even millions more to view, has me shaking in my shoes just thinking about it.

These boys and girls are so young, but they’ve mustered up the courage to really hone in on their skills and show the world over just how bright they are capable of shining!

This is Eryk Waszczuk, and I wish I could be like him! He is barely old enough to go anywhere alone, but it’s his stage presence and ability to give it his all that’s so impressive. He just owns it, from the second he’s on stage, wearing a blazer, white shirt, nice jeans and a huge smile.

The music starts and he’s off! From the first strong note, Eryk wails, immediately getting everyone’s attention. The crowd screams and his family looks on from the side stage, very proud. His younger sister even does a cartwheel!

Eryk’s been exercising his vocal chords ever since he was a wee little one. Even as a baby, playtime was singing time! Once he reached the age of five, Eryk expressed the desire to ditch normal elementary school in search of a curriculum that had more of a musical approach. Eryk’s voice and talent might be big, but unfortunately, he’s too young and didn’t meet the requirements of the specialized school. No sweat though. He’s pursued his dreams outside of the classroom.

This kid has been putting in every waking moment not spent in class perfecting his skills to improve his voice. So it’s no surprise that his performance struck a chord with every judge and got a standing ovation from the audition. He sings “When a Man Loves a Woman” by Michael Bolton, and he’s just too cool! He’s singing a song so far ahead of his time. Has he ever been in love? Doesn’t matter, cause this kid has everyone falling in love with his voice! If Eryk keeps up the good work, he’s bound to go far!

Click below to watch the little man put his spin on a very passionate song!