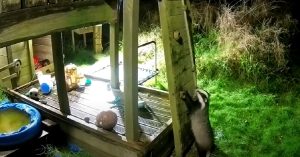 Like many other children out there, I owned an outdoor playset as a child. It had a mini rock-climbing wall, a ladder, swings, a slide, and even a telescope. I also owned pet cats and loved it when they would jump on my playset. If anything, I loved it more when they would join me than when another child would.

One English father and wildlife photographer, Robert Fuller, also knows that sometimes animals enjoy playing on children’s playsets. Fuller has a great deal of footage of random, wild critters on his kiddos’ jungle gym. Hedgehogs, weasels, owls, deer, songbirds, stoats, and badgers have all been seen in the act of playing, often at odd hours of the night. Those crazy critters!

Fuller was able to capture proof of the wildlife enjoying the outdoor playset thanks to the setup of cameras outside.

“I decided to fit cameras and lighting to the climbing frame to capture more animals using it,” Fuller explained.

And it wasn’t long before he realized how many critters were making use of his kids’ play structure and toys, and boy, it was a lot!

“It wasn’t until I started to review the footage that I realized just how many animals and birds were enjoying the play frame.”

They appeared to particularly love goofing off on the trampoline, messing around with a dollhouse, and using both watering cans and buckets.

But this wasn’t a one-time thing. Animals have been using the Fullers’ yard for entertainment for years. They know where to go to have a jolly ole time!

“It has been in place for six years now, and in that time it has given me, my girls and a host of wild species so much pleasure—especially recently when we’ve been in lock-down.”

Although the professional photographer and daddy has been taking and watching the footage for years, and he sees new and exciting things happen on the playground all the time, there are still some things he has yet to witness.

“I see it providing fun for many more years to come too. I’ve yet to see any animal find a use for its bright yellow bumpy slide, but you never know!”

The critters are definitely missing out. Slides are so much fun!

You can check out snippets of footage Fuller has captured below. How would you react if you saw furry critters playing on your kids’ outdoor playset without your permission?