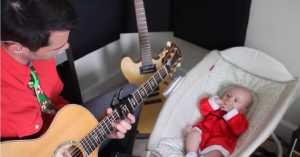 “Jingle Bells” is one of the most popular Christmas songs among young children. Not only is the beat fun and the lyrics easy to remember, but kids often enjoy ringing holiday bells as the tune plays. Generally, it’s a very cheerful and interactive song! It was one of my personal favorite holiday songs, too, growing up.

So, it’s no surprise that the father of the Feldman family was eager to introduce “Jingle Bells” to his four-month-old daughter, Summer Noel. It’s only fair as “Christmas” is her middle name! But rather than playing the song over the stereo, he decided to record a special version from his heart with a new set of lyrics, just for her.

Daddy may have recreated the perfect cover of the song with his soothing voice, but to take things up a notch further, he also filmed a little music video too, featuring Baby Summer and her mother, of course!

In the music video, Mr. Feldman asks his little one, “Do you wanna sing about Christmas?” His daughter, who’s dressed in her finest Christmas clothing, grunts happily. I believe that’s a big yes.

Throughout the music video, we get to witness heartwarming clips of Mom making Summer dance to the beat of the song. Other clips in the video showcase Dad singing to his daughter as he holds her. Too cute for words!

As for the song itself, Dad retains some of the original lyrics of the song, but his main goal was to remind his little one about the reason for the season:

About this time of year,

And what the reason is,

For all of this Christmas Cheer,” he sings.

Throughout the song, Mr. Feldman introduces God, Jesus, and Mary to his baby daughter and explains how Christmas ultimately started. So, not only is Summer getting a fun Christmas song to dance too, but she’s also getting an educational lesson.

Summer may not have a clue what the lyrics mean just yet, but she sure looks happy to listen to her father’s Christmas song!

The video was uploaded on YouTube in 2014. If it was put up the same year little Summer was born, that would make her five-years-old now. By now, she would definitely understand the lyrics. I sure hope Summer was jamming out to her daddy’s song this holiday season!

Hear the special “Jingle Bells” cover below, and make sure to watch until the end to see the music video outtakes.