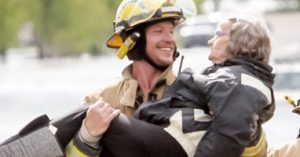 Floods are no joke. Some people think that floods can’t be that much of a disaster because “it’s just water.” But, that’s so far from the truth. When we’re talking about floods, we’re talking about a massive amount of water that packs a massive punch. These natural disasters destroy property, make ground vehicle transport nearly impossible, and are one of the leading causes of deaths from natural disasters in the US.

Floods are one of the natural phenomena that get people may think are the least dangerous when it comes to storms and the environment. But, its aftermath and even the effects they have when they first occur, can be devastating.

When Alberta, Canada experienced a catastrophic flood, a total of 32 states of local emergency were declared. Many communities were ordered to evacuate. By the end of it all, five people were killed, over 100,000 people were displaced, 2,200 Canadian Forces troops were deployed, and total damages exceeded $5 billion. It was a very devastating and trying time.

But during all of this chaos, an adorably heartwarming photo became a bright spot that has gone viral. Shawn Wiebe is a Nanton firefighter who was helping people who were trapped in their homes and cars as the flood water was quickly rising. But when Wiebe came across one older woman, he decided it would be best to simply carry her above the water. When he did so, the woman said something to him that he would never forget: “Oh! I haven’t been carried like this since my wedding night!” Wiebe burst into laughter upon hearing this, and newspaper photographer Lyle Aspinall happened to snap a photo at that very moment… The photo went viral and Wiebe became an internet sensation! In the video below, Wiebe is interviewed about the rescue and his newfound fame. What a wonderful yet humble person! Let us know what you think of this story and please share it with your family and friends!