One of the most anxiety-provoking first world problems is peering at your fuel gauge, only to realize that the dial is pointing at “E” for empty! Add driving on the freeway in an unfamiliar city with no gas stations nearby to the scenario, and things are even more problematic. I’m anxious just thinking about it.

Things like this really do happen, and it’s not just because people “forget” to get more gasoline. Sometimes it’s because fuel is expensive, leaving some people no choice but to risk driving on a near-empty tank to get to their end destination. That was true for one family of four from Florida one afternoon.

On January 30, the family was traveling by minivan to take one relative to the hospital during a medical emergency. But during the drive, the vehicle ran out of fuel, leaving them stranded. To make matters worse, the family didn’t have the money on them to get gas, let alone a way to get to the gas station. Putting themselves into a further pickle, one of the minivan’s tires was deflating. Talk about really bad timing.

Fortunately, after quickly dialing 9-1-1, paramedics were quick to tend to the family member’s medical emergency on the side of the road. Apart from successfully tending to the urgent situation, first responders went above and beyond to make the family’s situation smoother.

Captain Dennis Noble, Firefighter/Paramedic Duane Norman, and Drive Engineer Joe Clark are credited with pushing the vehicle a half-mile to the closest gas station, so they could pay for the family’s gasoline and get their leaky tire resolved, free of charge.

“This truly exemplifies the meaning of why HCFR exists… to serve others!” the Hernando County Fire Rescue posted on Facebook to hail the three heroes. 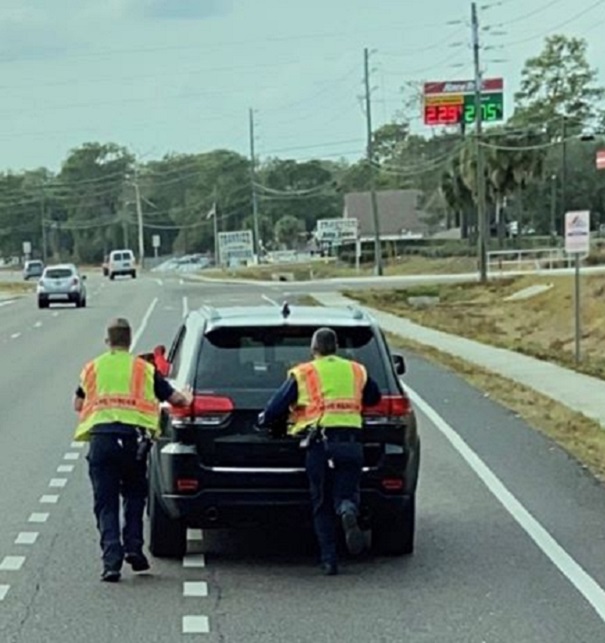 It might not have been part of the first responders’ job duties, but their work was nonetheless appreciated. Not only was the family over the moon by the great service but so were other members of the community.

“Thank you for going above and beyond for this family in a time of crisis. It’s comforting to know that you’re in our community looking out for us,” one woman said in a comment.

And, according to another Facebook user who actually witnessed the scene in person, the road where the car broke down wasn’t the safest, making the rescue even riskier.

“I saw them position their vehicles [that day] to protect the car. That tends to be a dangerous stretch of road, so it made me very happy to see them looking out for the passengers,” they wrote.

So far, the three brave Hernando County Fire Rescue employees have received recognition from over 100 commenters since the post was shared 187 times on Facebook. They deserve all the recognition they can get. They are true heroes!