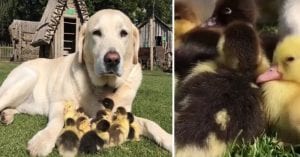 When we find out that an infant, whether it be a human or an animal, has been abandoned, our first instinct is to do something to help them. Even if we don’t have experience when it comes to caring for that certain species, our motherly/fatherly intuition becomes activated as we find ways to give them the love and care they lack.

Even animals have this instinct. A momma cat might take on a litter of kittens who are not their own, or a duck might “babysit” the ducklings of another fellow duck for the day. Perhaps you’ve even witnessed an animal caring for an animal of another species. In this case, we call this an interspecies family.

One of the cutest interspecies families consists of a 10-year-old male Labrador and nine tiny ducklings; they live at the Mountfitchet Castle in Essex, England. The canine took the ducklings in shortly after it was discovered that their mother was nowhere in sight. Video footage of the modern-day family posted by CBS News on YouTube has earned over 11,300 views since May of 2018.

In the footage, we watch in admiration as father Fred, the Labrador, cuddles with his small, feathery children. Fred may be much larger in size, but he’s a gentle giant! The dog’s large size comes in handy when it comes to letting the beaked babies ride on his back.

Even though Fred is not the same species as the ducklings, he still does the best he can to accommodate to their needs. For instance, because the ducklings need to swim, Fred likes to take them to the moat on his family’s castle property for a quick dip in the water.

Mountfitchet Castle is not only home to Fred and the nine ducklings but also other rescued animals who roam free on their 10-acre site. According to Fred’s owner, Jeremy Goldsmith, “He’s got a lovely nature and has grown up around rescued animals.” This is especially apparent with how Fred interacts with the ducklings!

“I was fully expecting this dog to be female with that maternal instinct, not a male. Fred’s obviously a very gentle, loving dog!” comments one user on the video.

Even though Fred may not be able to care for the ducklings exactly like a momma duck, it’s not physical similarities or DNA that make a family. Rather, a family is formed when there is a selfless, caring bond between at least two critters. Fred definitely has proven that!

Watch the Labrador interact with the adorable baby ducks in the video down below!