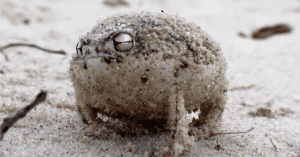 Have you ever seen your toddler or young sibling or cousin get so angry they do ridiculous things that make you want to laugh really hard? I’m sure you’ve felt the pain of trying not to smile at how adorable your niece or nephew looks when they pout in a fury. You can’t help it. They’re just so darn cute.

Well, the desert animal in the video below, believe it or not, will remind you of the adorable angry children in your life. The animal is a desert rain frog. It’s found mainly in South Africa and Namibia. This small frog is tiny, plump, and has bulging eyes. It also has legs so short that it can’t jump! Instead, it walks around the desert, covered in so much sand that it looks like the same is a part of its anatomy.

Another interesting fact about this frog is that its underside is transparent! So, yes, you can see its insides. However, those reasons are not why this video of the frog has gone viral.

So, other than those crazy facts (I mean, seriously, you can see its insides?), what makes this frog so special? And why does a forty-five-second video of it have nearly 8,000,000 views? What makes this frog unique is its croak. More importantly, the sound it makes when it’s angry. It’s warcry, as the video’s narrator called it. I’m sure you’ve heard a frog’s croak before. It’s deep and gritty. However, this frog’s croak is the complete opposite.

It’s high. Like, really high. It’s compared to a dog’s squeaky toy, and there is no better connection. While I watched the video, I didn’t know what to expect, but when I heard it, I burst out laughing. What makes it even funnier, and ten times more adorable is that the frog is angry. It’s not making a noise for the sake of entertaining the cameraman; it’s pissed.

The high-pitched croak is so cute, I had to instantly show someone and there’s no doubt that you’ll be running to do the same.

One commenter under the video hilariously wrote, “Desert Rain frog: ‘I’ll beat the living daylights out of you.’ Everyone: Awwww.” The frog sound is so delightful, some even jumped to its defense. “I DEMAND TO KNOW WHO PISSED HIM OFF,” another commenter said, or rather, yelled.

If you want to hear this frog’s squeaky dog-toy croak, check out the video below!