YES NO
You can change your choice at any time in our privacy management
By Helena
"No Thanks. Please Close This Box!" 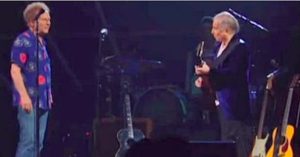 Sometimes, a song is released and you know instantly that it’s going to be one that will be remembered for decades to come. It could be a one hit wonder, or it could be from an artist that is well-known for their amazing vocal abilities and inspiring instrumental talent. And one such song is ‘The Sound of Silence’ by Simon and Garfunkel.

Of course, many artists have taken a crack at this mesmerising tune, and while they’ve managed to do a great job, no one has been able to hold a flame to the original version. It is as if, when you hear the opening line of, “Hello darkness, my old friend,” you know that you’re about to experience an array of heartfelt emotions because everything about the song is simply magical.

The song was first released in 1964, and even today, people of various ages and backgrounds would be able to recognize and appreciate it. But what happens when the talented duo meet up for a little reunion some five decades later to sing their classic song? Would the quality be different? Or would it still have the ability to send you into a trance? You’ll be happy to know that the answer is in fact, the latter.

In the video below, you’ll see Simon and Garfunkel on stage together, performing their music just as powerfully as ever, if not more. Their voices still bring shivers down the spines of all who hear it, and the pair still has amazing chemistry together. In short, the video is an absolute treat!

Give it a listen below and if you’ve adored it, be sure to share it with your family and friends.