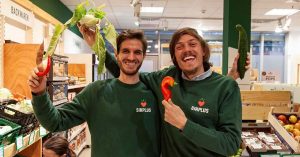 Do you ever stop to wonder what supermarkets do with all of the produce and other perishable products that don’t end up selling by the sell-by date? Different stores may do different things. Some may discount the products in hopes that people will snatch them up quickly. Other grocery stores may be fast to trash the products without second thought. The latter seems to be the most common among grocery stores today. In fact, supermarkets in the U.S. throw away a whopping 43 billion pounds of food every year.

With grocery store waste being a huge problem today and, not to mention, so common, it seems like there’s no hope. Fortunately, supermarkets like Berlin, Germany-based SirPlus are tackling the issue little by little.

So, what does SirPlus do exactly? The supermarket resells edible products that are near their expiration date, are past-expired, or are generally deemed “too unattractive” to sell at your average grocery store. The products the company sells come from other grocery stores, wholesalers, and restaurants. SirPlus then sells the products 80% cheaper than what they’d normally go for elsewhere.

Fortunately, you won’t have to worry about purchasing lethal meat or moldy yogurt from the store. Timo Schmitt and the rest of the SirPlus team make sure to thoroughly check each food product prior to placing them on shelves.

“We check smell, taste, consistency and packaging.,” he explained.

If it’s uncertain whether a product is safe or not, the supermarket doesn’t take the risk. Instead, the team will call in a laboratory to verify that it’s still safe to sell and eventually consume.

Either way, because German law allows SirPlus to legally sell expired food, customers are aware that when they purchase anything from SirPlus, they’re taking a risk.

According to the grocery store’s founders, Martin Scott and Raphael Fellmer, they’re not only helping resolve food waste and allowing customers to get their hands on affordable food items, but they’re also doing a big favor for retailers and the like.

“Suppliers such as farmers, […] wholesalers [and] retailers have a strong economic incentive to partner with us. When buying or trading their surplus via our marketplace […] we’re saving them significant disposal costs, while providing a new revenue source,” they said in a 2017 interview.

In fact, the store saved 4.4 million pounds of food in 2019 alone. As they continue to grow and expand, they’ll be able to save even more food that would otherwise just be wasted.

SirPlus plans to open more stores in Berlin and, eventually, in other cities (man, I wish the U.S. would open a few!). In 2020, they hope to create a product line with the SirPlus label and launch an online platform offering home grocery delivery service. In addition, they plan to continue to market their subscription service called Retterbox (translation: Rescue Box) where subscribers receive a random array of perishable foods saved from dumpsters on a monthly basis.

Click play below to learn more about SirPlus and what they do.