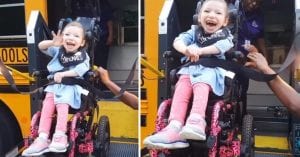 For many of us growing up, the first day of school was always dreadful. Saying our final goodbyes to summer vacation, getting up extra early, and preparing ourselves for a long day of getting settled into a new academic year isn’t necessarily the most exciting of things.

Each year for me, the first day of school was my worst enemy, or really, the anxiety that would be triggered by it. Feeling hot and lightheaded, vomiting before leaving the house, skipping breakfast from lack of hunger, heart beating a million miles a minute, sweating bullets, constant trembling, overthinking every little thing that could possibly go wrong on my first day, the whole ordeal. While for most children, their first day of school experience isn’t as much of a battle, let’s be honest, one of the few things they usually look forward to on their first day back is seeing their friends again.

But every student is different. 6-year-old Ariana Hopper from Brunswick, Georgia had the perfect first day of school attitude. She wasn’t angry, stressed out, or bitter that summer was over. Rather, she was thrilled to be back at school to kickstart second grade at Altama Elementary School in August of 2019.

As Ariana was being lifted into the school bus in her black and hot pink wheelchair, her father immediately pulled out his phone to record her adorable reaction. Although Ariana is non-verbal, her face says it all. Flashing a large, authentic smile while giggling and waving goodbye to her family, it’s clear that Ariana can’t wait to get back to the classroom.

Fortunately, while many students with special needs aren’t given the proper support and kind treatment in school, Ariana is provided a positive academic environment to thrive in. In fact, as part of her program, she’s currently learning sign language to help her communicate. While she has learned some ways of communicating via sign language, for now, the girl’s beautiful smile will act as the perfect form of non-verbal communication.

Not only is Ariana happy to be at school, but she comes home to a very loving home environment. Ariana was fostered by her now-parents, Mark and Rebecca, and officially adopted at the age of two. The smiley second-grader shares a household with a total of seven siblings, two of which are also adopted. While her parents were hesitant about adopting a child with cerebral palsy, uncertain whether or not they’d be able to provide the best care for her given her condition, adding her to their family was the best decision they ever made.

Ariana is a bright and happy soul. She lights up even the darkest of days. No matter where she’s at, whether at home or at school, the 6-year-old is definitely the type of person you’d want to be around.

“Honestly everybody that comes in contact with her at church, at work, they always tell me they love her and how much her smile brings joy to them. I’m glad that everybody gets to see this joy that she has that she brings to us every day and that everyone else can see and experience it,” Mark says.

Check out Ariana’s adorable first day of school footage below. Isn’t she just so gosh darn cute? She could put a smile on anyone’s face!