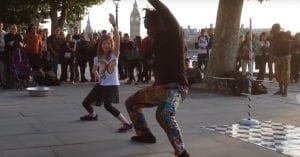 When we’re visiting a new city or country, or merely strolling the streets of our hometown, it’s always a treat to come across a street performer. Trumpet players, jugglers, mimes, no matter what type of performer we happen to come across, the entertainment they provide is something to be cherished.

One particular performance in central London sticks out. Since being posted, the street performance has earned over 11.4 million views. But it’s not just any street performance; the professional performers apart from such decided to step things up a notch by asking a 9-year-old tourist from Sweden to star in their show!

With energetic beats blaring and Big Ben standing tall in the background of the video footage, the performance begins with the young girl and one of the street performers engaging in five push-ups as part of their warm-up. As the young girl begins doing hers quite effortlessly, the crowd goes wild.

Then things start to get intense between the young girl and the street performers: cartwheels, twists in the air, acrobats, and dancing. Each time the adorable, copper-headed girl is instructed by the primary performer to replicate his moves, she nails it without missing a beat, earning wild cheers from the audience surrounding them.

Although the young girl is now 15-years-old, viewers from around the world continue to appreciate the gone-viral performance.

“Some of the most personable people you will meet are the street performers, many very talented people who rely on personality and skill to earn a living on the streets. Always fun to watch and sometimes makes you wonder why they have not been ‘discovered’ by someone in the business?” says one commenter on the video.

“This is why street performers are great. I wish people respected them more. I know there are some people who do shady things, but we shouldn’t let that drag the nice people down,” says another commenter.

Not only can we cheer the Swedish girl’s great moves and ability to tend quickly to the requests of main street performers, but we can applaud her for her confidence and bravery in performing for such a large group of people! Even if she remembers very little from her 2013 London trip today, her street performance will surely remain the highlight of her visit.

I’d rather not spoil the rest of the show for you. Check out the street performance below for yourself!