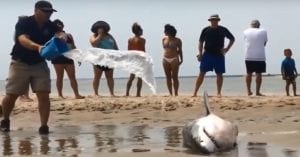 Being kind isn’t just about being nice to people who “deserve it” or towards those who we already love and care for. Kindness can also be given to strangers and even those we dislike. After all, acts of kindness generally involve selflessness, empathy, and no expectations for anything to be given in return, so why should we only direct kindness towards certain individuals?

In one stressful beach scene, vacationers witness a great white shark stranded on the sand. As everyone knows, sharks are generally considered dangerous creatures. The second we spot one swimming from afar, we hop out of the water for fear they will make us their lunch. However, in the video footage of this scene, bystanders don’t run or scream. Rather, they engage in a shocking act of kindness as they help the seven-foot-long, dangered fish get back to the ocean where he belongs.

In the video of the event, which was filmed on July 13, 2015, in Chatham, Massachusetts, we witness the frightened great white shark on its back with several people gathered around. According to witnesses, the shark got beached when he attempted to chase seagulls on the sand.

Although sharks are definitely scary with their 300 sharp teeth, watching the footage of the sea creature gasp and slowly whip his tail around, struggling to get back into the water, is horrifying and downright sad. One can’t help but feel sorry for the animal. If we were the ones suffering, we would want someone to help us too.

Fortunately, the great white shark was in good hands. While the shark was now lying fairly still on his back in the clip, two men continuously poured water on him with children’s sand pails in an effort to help him.

Then, Dr. Greg Skomal of the Division of Marine Fisheries, Atlantic White Shark Conservancy and Chatham Harbormaster Stuart Smith tied the great white to a long rope, quickly dragging him back into the water with a boat.

After the poor fella was back in the water, the team of professionals helped revive him. What a scary scene!

Watch the video below to see the shark rescue for yourself. It’s certainly a little heart-pounding, but at the same time, is heartwarming knowing that the poor shark is getting help.

In another video shown below, the shark gets taken about a mile offshore. Finally, we watch the young shark become responsive and swim away. It looks like the rescue was a success! Whew.