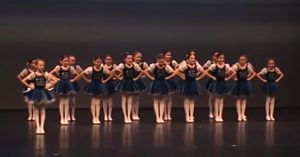 Dance sirtaki (syrtaki) is a Greek dance composed of various speeds of Greek folk dances known as hassapikos. This dance became popular when the 1964 song, “Zorba’s Dance” (“Horos Tou Zorba“), was composed by Mikis Theodorakis and featured in the Academy Award-winning film, “Zorba the Greek.” The sirtaki choreography present in this movie along to Zorba’s Dance eventually became a worldwide hit!

But with performing any dance comes the need for practice and patience, and if you have two left feet, well, learning a new dance can be a more complicated process. However, for the lovely girls performing to the iconic Zorba’s Dance during the 2004 Dancefest in Newmarket, Ontario, Canada, it’s clear that they spent plenty of time ensuring they put on their best performance possible, with a modern twist!

In a video of their dance show, the middle school-aged girls are dressed in identical, dark-blue dresses featuring a tight bodice and short, fluffy skirt along with white tights, white tap shoes, and a white bow attached to their ponytails.

The popular Greek tune starts out slowly, as do the girls’ dancing. Seconds after the song begins, more girls come out on stage, and each of them claps and stomps to the beat of the song. While the audience may already be cheering them on, they haven’t seen anything yet!

The dancers come closer together as the music picks up and tap their little legs as quickly as they can. And although it isn’t an extra replica of the original dance, the girls’ end up putting on a spectacular show, so spectacular that even people with Greek heritage cheer on the dancers in the comments section of the video!

“As a Greek, there are very few things that make me prouder than such videos!!! Absolutely amazing… They are even screaming OPA and breaking plates (we do not do that anymore).  Absolutely wonderful. To hell with the ‘right steps,’ who cares? Well done kiddos, you made me laugh and cry at the same time,” one person comments.

The video received over 800 other comments, along with over three million video views. That’s impressive, but you can definitely see why it went viral! Not only is it an enjoyable show in general, but it offers the perfect combination of traditional and modern Greek touches, including smashing plates at the end of their performance!

I’m not even Greek, and their performance makes me proud of Greek culture!

Watch their incredible performance in this video: