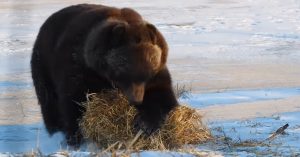 One of the ironic parts of parenting is buying your young children several expensive toys, only for them to find pleasure in the wrapper or box that it came in! Although some parents find this frustrating, some kids are just simple while others like to play imagination with simple props. You can’t really blame a child for liking what they like.

Hugo, a rescued grizzly bear living at the Alaska Wildlife Conservation Center near Anchorage, is one of those “kids” who finds joy in the little things. Her recent most favorite toy? A simple hay bale.

In a video filming her playtime, Hugo rolls the rectangular object in the snow before picking it up and falling on her back with it. She’s definitely trying to figure out just what this hay bale thing is supposed to do!

It’s not long into the clip that the silly, brown bear starts to throw the hay bale into the air. Right when we think she’s taking out her anger on the bale, Hugo shows us otherwise when she begins doing innocent somersaults on the cold, snowy ground with her new favorite toy. She’s the cutest!

Based on how she interacts with her toy, I think Hugo sends a pretty clear message: you don’t have to have fancy toys or expensive play structures to have fun. Both bear and child alike, you can find happiness in any object you choose to, whether that be a large ball or even a small paperclip.

The best part about the footage of Hugo playing with the bale of hay isn’t her fun, playful demeanor or even the little “message” that she sends but the fact that in the year 2000, 15 years prior from when this video was filmed, she had a rough past. Before being rescued, Hugo was starving, severely dehydrated, and had hundreds of porcupine quills stuck in her paws. She was in such a bad state of health that she lacked the survival skills she needed to live out in the wilderness. In fact, at the time she was rescued, she was unable to eat or even walk.

But look at her now in the adorable video below! To know what Hugo has gone through in the past to see how well she’s doing today is an amazing sight to see. Although the grizzly bear is now a permanent resident at the Alaska Wildlife Conservation Center, she has certainly improved!