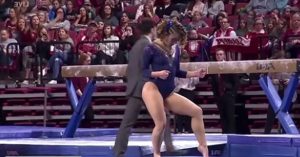 Talent doesn’t come easy. Even for those who are dedicated to what they do, it can take several years and long hours of practice to obtain the level of proficiency they need to be considered an expert in their field.

22-year-old Katelyn Ohashi, has both dedication and skill when it comes to her gymnastics career. You have the gymnasts who are good at what they do, and you have the gymnasts who do what they do out of passion, even if it isn’t their strongest suit. Then you have Katelyn who is a master of both, which is apparent in her routine during the 2019 NCAA Semifinals. In fact, her performance was so good that it was the most viewed sports video in 2019, earning over 74 million views since it was posted in January!

During her popular routine, Katelyn dances and performs various flips, twists, kicks in a blue leotard to the songs “Remember the Time (12″ Main Mix)” by Michael Jackson; “I Want You Back” by The Jackson 5; “The Way You Make Me Feel” by Michael Jackson; “September” by Earth, Wind & Fire; and “Proud Mary” by Tina Turner.

Every move the young woman makes is swift yet flawless. The entire time, the flexible gymnast flashes a big smile on her face whether she’s flying in the air or doing the splits.

Although it’s apparent that Katelyn has breathtaking talent, all while looking quite happy and confident while in the midst of her performance, there’s something surprising that she has shared:

On top of criticism about her physical appearance, Katelyn has suffered numerous injuries throughout her career, which temporarily halted her ability to partake in gymnastics. But regardless of her struggles, Katelyn has risen above the negativity, continued to do what she loves, and kept a smile on her face because she knows engaging in gymnastics means so much more than the hurt she has had to endure.

In fact, the talented gymnast thus far has earned five gold medals at the Jr. Pacific Rim Championships, two golds and two bronzes at the NCAA Championships, and a gold at the FIG World Cup for her hard work.

Check out Katelyn’s floor routine in the video below at the NCAA Semifinals. Can you see why it was the most viewed sports video of 2019? I sure can!