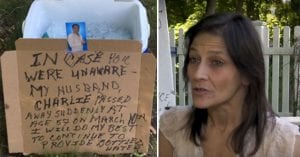 When a loved one passes, we typically receive an immediate sense of sorrow and hurt that is unlike any other kind of emotional pain. As much as we want to smile about the good this person brought to our lives and cherish each moment we spent with them, sometimes we can’t help but grieve, shed tears, and wish they were here with us again.

Due to the debilitating emotions, we feel after one’s passing, it can be emotionally and mentally difficult to move forward and celebrate their life in a positive way. In turn, we may at first doubt our ability to make their post-life wishes come true.

For widow Velvet Poveromo of New Jersey, she too had difficulty with the passing of her husband, Charlie. The pain was even more intense for Velvet knowing that her husband would no longer be there to provide a cooler filled with cold water bottles outside their home to help keep the community hydrated, a kind act he was dedicated to. The community would eventually catch on.

Apart from offering free water to construction workers, garbage men, police officers, the mailman, and the rest of his community, Charlie would also allow people to sit under the shade of his tree on his lawn during hot summer days.

According to Velvet, “Maybe 5+ years ago, we were suffering through a brutal summer heatwave and Charlie saw our garbage truck pull up and the men were pale and sweating profusely. He came running into the kitchen, grabbed a bunch of plastic cups and our big jug of water and made sure everyone got as much as they wanted.”

Charlie was also a good sport when working as a bartender. His boss Tony Del Gatto had plenty of good things to say about his personality and work ethic: “He was one of the finest gentlemen I had ever met. Everybody felt like an individual to him. He spoke directly to people, his eyes never wandered. There could be 20 or 30 people at the bar that needed attention but when a person spoke to him, they were the most important person in the room,” he says.

Then one day, Charlie suffered from a fatal heart attack. Everyone who knew him was devastated. Even those who weren’t close to Charlie and mainly knew him as the “water bottle man” knew something was going on when the cooler was no longer in front of his house.

However, Velvet was determined to carry on his legacy. “I had to step into his shoes. Once the weather started getting warm, I thought, ‘Oh, my God, the water bottles.’ I had to do it. It was his tradition, and I had to honor him.”

At first, the grieving wife was not able to carry on Charlie’s act of kindness the way he once was able to. Then when she posted about her husband’s deed on Facebook, that’s when the community stepped in to help provide water bottles for the cooler along with some snacks. Velvet was thankful and overjoyed that others were pitching in.

But it’s not just Velvet honoring Charlie’s life. Today, coolers offering beverages and/or snacks have started popping up all over the U.S. for the same reason. There are coolers in upstate New York, Paramus, Norwood, Oradell, and even Wyoming.

“It’s taken on a life of its own. Every person who does it, it’s a tribute to him,” says Mrs. Poveromo.

Kudos to Velvet for honoring the passing of her husband in one of the most thoughtful ways possible! Charlie would be extremely proud of her strength, honor, and dedication.

Be sure to listen to Velvet’s interview with Jersey Matters in the following video.