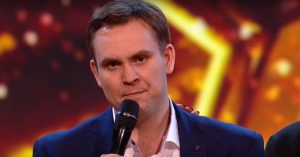 We all have our favorite artists and bands. As we listen to their music, we can’t help but admire the talents they’re able to deliver. But sometimes we forget that there are real people behind their songs, humans who have imperfect lives. Just like us, musicians have suffered loss, dealt with mental health problems, battled personal problems, and gone through relationship issues. Sometimes they’re willing to talk about it; other times, they never or rarely do.

For 38-year-old Barry Darcy, a singer from Ireland, he not only decided to share the story about his physical disability with the world, but it was a big reason why he was certain he wanted to appear on Ireland’s Got Talent for their 2019 season.

With tears in his eyes, Darcy told IGT‘s audience and judges, “To be honest, it’s a bit of a sad story. It’s quite difficult for me to talk about it.”

In 2013, Darcy had experienced a sudden and unexpected back injury. A herniated disc pressed on the nerves down his legs, resulting in paralyzation.

“I just went to get out of bed one day and fell onto the floor.”

Due to the severity of his condition, he was told he’d have a 50-50 chance of ever recovering. As an aspiring singer, Darcy never thought he’d get to walk on another stage again. He thought his career was over. Nevertheless, his wife Fiona and his sons Ryan and Luke stuck by his side, helping him recover in every way that they could and taking him to his physical therapy appointments.

It was with the support of his family, his hard work, and the help from physical therapy that Darcy eventually overcame his months-long paralyzation. So, when the opportunity to apply for Ireland’s Got Talent arrived, Darcy was more than eager to audition, choosing to sing Elvis Presley’s song, The Wonder of You.

Many were touched not only by Darcy’s sad-but-happy-ending story but by his singing talent.

Although it’s hard to match up to Elvis, Darcy ended up putting on a flawless performance! In fact, both the judges and the crowd were dancing along to the auditioner’s singing. It was apparent from the get-go that everyone could see Darcy’s talent, especially when he hit a final note, and everyone roared in excitement!

“Oh my God, they love him!” says the show host, Lucy Kennedy.

Moments later, Darcy receives the ultimate surprise: a slam of the Golden Buzzer, earning him automatic entry into the live semi-finals! Darcy tears up with his family on stage as confetti flies.

“…when you did sing, [your story] just meant so much more. It was just brilliant. You put everything into it. Your vocal was just fabulous. This is truly deserved. I’m so pleased for you. Louis, you made such a good choice,” Judge Denise van Outen says. I couldn’t agree more!

Hear Darcy’s Ireland’s Got Talent audition, and learn more about his story below. He is such an inspiration.

edmc 1 year ago
To Family and Friends! martythesilverfox
0 Reply