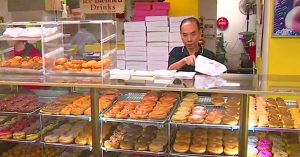 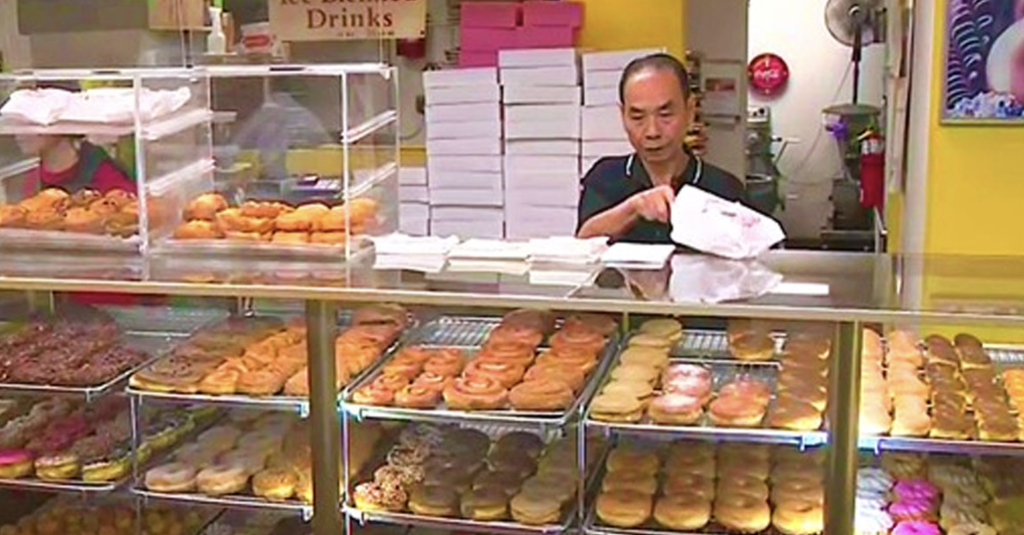 Small, round deep-fried circles of dough dunked in sprinkles and a sugary coating. Donuts are a North American staple and kind of the perfect snack between meals with a coffee. Easy, convenient, delicious and really, really hard to resist. It’s really hard for me to eat just one (I tend to gobble a few at a time) and at this specific donut shop, nobody can eat just one either!

Shopowner John Chhan has a lot of really great customers. They’re streaming into his Seal Beach, California, USA, shop and buying the man’s delightful donuts by the dozen not only because they’re out of this world yummy, but the increase in sales are also helping to support a very good cause.

Donut City is the mom and pop shop John Chhan and his wife Stella opened 30 years ago as refugees fleeing their native homeland, Cambodia, back in 1979. John and Stella have been diligently selling all different varieties of these fried delights and coffee, side by side, year after year. With a steady and loyal customer base, people can’t get enough of the couple’s donuts, coming in at all hours of the day to pick a couple up.

But, when customers noticed only John behind the counter without his wife, people took notice. The devastated husband revealed that his beloved wife suffered an aneurysm, and was recovering, but feeling sick and weak while she undergoes rehabilitation. All he wants to do is spend time with her, but he has to tend to the shop to make sure ends meet and business keeps running smoothly.

So, every day, once all of John’s donuts are sold, he closes up and rushes to be with her. Neighbors are helping by coming in and buying donuts by the box load! Dozens are flying off the shelves so he can leave as soon as possible, without losing sales. The story has spread and as a result, people are showing up to buy as many donuts as they can hold. Customers have even offered to help John start a GoFundMe page to raise money to support his cause, but the store owner has politely declined, simply saying, that he just wants more precious time with his wife.

Click the video below to watch more about this community effort to help John sell as many donuts as possible so he can see to his wife.