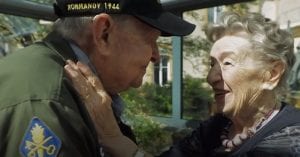 People come and go, and circumstances make it to where we are unable to see certain people for prolonged periods of time. However, if fate allows, those people will reappear in our lives at some point in time. Although it may not be at the exact moment we want, the sadness and emptiness we may feel when they’re away teach us the value of being patient and accepting of what is and what will be.

WWII U.S. veteran, Kara Troy “KT” Robbins, was certainly one man who learned the value of patience and acceptance when he met the love of his life, Jeannine Pierson, while stationed in Briey, France in 1944, never thinking he’d see her again. Prior to their separation, the then-24-year-old soldier’s eyes were immediately drawn to 18-year-old Pierson when he asked her mother to wash his clothes, leading up to their brief, two-month fling.

However, interrupting their love story, Robbins was redeployed to the Eastern Front. He told Pierson he’d “maybe come back and take her,” but that didn’t occur. “When he left in the truck, I cried, of course, I was very sad. I wish after the war he hadn’t returned to America,” explains Pierson.

When Robbins eventually returned to America, that’s when he met and married his wife of 70 years, Lillian. The couple opened and ran a Mississippi hardware store after KT’s service. Lillian later passed away at the age of 92.

Like Robbins, Pierson also married someone else and raised five children. Like Lillian, Pierson’s husband had passed away before her. Now 94-years-old, Lillian was living in a retirement home.

Then something coincidental occurred. Robbins was being interviewed by French journalists to write a piece for the 75th anniversary of D-Day. Of course, Robbins wanted to mention something about Pierson, but he was certain she would no longer be alive. Fortunately for Robbins, the journalists discovered that Pierson was in fact still alive and were then able to track her down. “She’s alive, and she’s waiting for you,” they told the war veteran.

That’s when Robbins took advantage of the opportunity and decided to travel to France to meet up with Pierson. In video footage of their beautiful reunion, they share many smiles, loving touches, and romantic kisses. “Jeannine, I love you, girl,” Robbins tells her. I’m sure it feels amazing to get the chance to tell her those words to her face after all those years!

Seeing both KT and Jeannine light up during their reunion is enough to heal a broken heart! The veteran even pulled out an old picture of Jeannine, which he had saved all the time they had been away from one another. They genuinely really love and care about one another, regardless of the many changes that occurred to both of them during their over-seven-decade timeframe of separation.

Although there was a big gap between their recent reconciliation, and Jeannine had hoped he’d come back sooner, these two lovers remind us of many things. They teach us that things happen for a reason. They also teach us that those who are meant to be together will always find their way back to one another when the time is right.

You’ll love seeing KT and Jeannine’s heartwarming reunion in the video below!