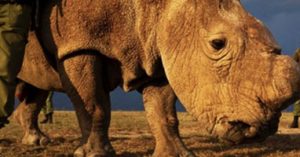 Wildlife poaching is not only illegal, it’s horrific and has very permanent consequences to our planet. Recently, some very sad and unsettling news broke: there is only one male white rhino left in the word. One. Let that sink in for a moment. His name is Sudan and he now lives at the Ol Pejeta Conservancy in Kenya. White rhinos are highly sought after by poachers because their horns can be sold as a supposed cure-all medicine (it’s nothing more than snake oil). [googlead]Thankfully, Sudan is now under armed guard, 24/7, in an effort to preserve his species.

The last male white rhino is guarded by 40 armed men. His name is Sudan, and he is the world’s last hope to preserve the white rhino species. You can support this cause by making a donation at this GoFundMe campaign. Please also raise awareness about this endangered species by sharing this story with your family and friends.