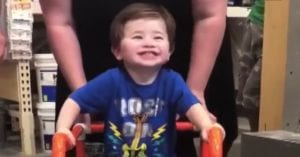 Acts of kindness come in many forms. Purchasing food for the person behind you at a fast-food restaurant, volunteering at a local soup kitchen, and donating necessities to a homeless shelter are just some of the many ways you can give back to our community and those around you.

The whole idea behind engaging in random acts of kindness isn’t to be noticed by others or receive something in return. Rather, the intent is to make other people’s days or make their lives a little easier from the goodness and selflessness of your heart.

When Justin Moore walked into Home Depot to purchase parts to construct a temporary walker for his 2-year-old son, Logan, little did he know that the store’s employees would be so generous.

As an infant, Logan was growing as similar to most babies. However, what made him different was his physical setback. Logan was having difficulty raising his head and getting around. It wasn’t until his parents Christian and Justin took him to the doctor that they discovered that their baby has a condition called hypotonia or floppy baby syndrome.

Hypotonia involves reduced muscle strength and muscle weakness. Babies with this medical condition often have little control over their neck muscles, feel limp when held, and have difficulty sucking and swallowing.

While hypotonia is treatable with several sessions of physical therapy, the Moores had to help their child get around in the meantime. That’s when they decided to provide Logan mobility with a walker. Considering their insurance refused to cover the expense of the walker, the next best thing the couple could do was make it themselves.

So, off to Home Depot Justin went and straight to the service desk to ask the manager Cathy Ennsley if they had the parts he needed in stock, so he could make the walker for his son. Right away, Cathy knew they had the parts. However, she told Justin she’d have to ask the store manager. She had a secret plan that Justin had no idea about.

Cathy came back out to tell Justin that they’d have to look in storage for some of the parts. She asked him to come back in an hour. During the hour, Justin and Logan decided to go out for some ice cream.

While they were away, the store manager and some employees found the parts needed for Logan’s walker and constructed it for him. The Moore family was overjoyed by the surprise when they returned! Logan was nothing but smiles as he tried out his brand new walker. According to Justin, he never saw his son so happy before!

The Moores were already grateful for the Home Depot’s employees and their hard work, but then Cathy told them that they wouldn’t be charging them for the walker. Can you say goosebumps and watery eyes?!

Thanks to Home Depot, Logan will be able to learn to walk and explore the world around him. While he will need extensive therapy in the future, the walker will still give the little guy the headstart he deserves!

Watch the video below to see little Logan’s adorable reaction to getting his new walker from Home Depot. He is such a sweet, happy toddler!