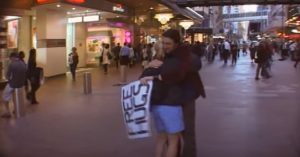 The way we interact with others has certainly changed since the Coronavirus outbreak. Many of us have been unable to meet up in person with loved ones. We’re less likely to handshake the new people we meet. Likewise, we’re turning down hugs. As depressing as it sounds, we’re doing these things to keep ourselves and one another safe from the potential spread of the virus.

But if there’s anything that might help us during this time, it’s imagining the sensation of receiving a hug or even watching other people hug one another. A video featuring a 14-year-old “free hugs” campaign led by an Australian man named Juan Mann is something that many people under quarantine are finding comfort in today.

Out and about on the city streets, Mann held a cardboard sign that simply said, “Free Hugs.” People of all different backgrounds and ages approached him for a hug. Some people preferred brief but firm hugs. Others literally leaped into his arms. Either way, each participant was in need of a hug, and they got it through this kind gentleman.

Not only did the campaign footage give present-day viewers who have been deprived of hugs a little something to look forward to, but it made many of them realize how special and meaningful a simple hug can be.

“I will be holding up one of these signs after all this social distancing stuff is over,” said one commenter.

These two people aren’t the only ones who feel this way. Many people around the world have the same perspective.

Perhaps after watching this video, we can see how we might have taken the gesture of a hug for granted. Some of us give them out so easily, and really, it doesn’t take much effort to give or even receive one. While simple in how they’re carried out, a hug can truly be powerful on a mental and emotional level. It’s one of many ways we non-verbally communicate with someone, comfort them, or express our love.

I think hugs will never go out of style. One day, we will all be able to hug strangers again. Let’s just hope it’s sooner than later!