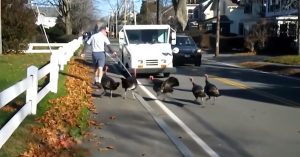 If there’s anything the Internet doesn’t lack it’s strange and funny videos. The video below is definitely one of the weirdest that we’ve seen, so naturally, we wanted to share it with you.

You’ve heard of dogs chasing mailmen, but the mailman in this wasn’t being chased by a dog.

While in Cape Cod, Massachusetts, this poor mailman was making his daily rounds when something very unlikely happened. He was chased by a wild rafter of turkeys. Yeah, I know, I did a double-take, too.

However, to this mailman, the situation isn’t unlikely anymore. You can see that he’s got a stick in his hand and he uses it to make sure that the turkeys are a couple feet away from him at all times. So, it’s evident that this turn of events isn’t unusual to him anymore.

How did he know to do this? Because this man is chased by the rafter of turkeys, about five turkeys to be exact, every single day.

The mailman says that he’s used to it by now, and that’s why he carries a stick with him. He gets into his car, brings the stick in, and the turkeys stay there because they’re unable to step into the vehicle. This stick is in no way used to harm the animals.

The man then drives away carefully as to not accidentally run over one of the turkeys. While it may be funny to read about this incident, you might just want to watch the video. In it, you can see the man walking down the sidewalk, trying to get back to his car, as the rafter follows behind him. He simply waves his stick left and right, slowly, so they don’t get too near. He switches between watching them and watching where he’s going so that he doesn’t accidentally trip or bump into something.

It seems to us that the turkeys have grown fond of following the mailman around. For all we know, they’re trying to protect him, right?

One comment under the video read, “The turkeys were not happy with USPS customer services,” and, maybe they’re right, too. I guess we’ll never know.

If you’d like to see the short clip of this mailman being chased by a rafter of turkeys, watch the video down below. Later, when someone gives you a weird look and asks you why you carry a stick with you, just show them this video, and they’ll understand.