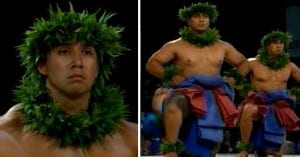 One of the most beautiful things about dance is its diversity. Nearly every culture and group have their own signature dance, from the German Schuhplattler to the Irish famous stepdance. Seeing how different countries perform the universal art of dance in their own way is intriguing.

As for the Hawaiians’ hula, this type of dance has been around for thousands of years. The hula comes in two different forms: hula kahiko and hula ‘auana. Kahiko is an older version of the dance that’s usually performed alongside percussion instruments whereas hula ‘auana is a more modern type of hula often performed with a ukelele or guitar.

Regardless of the type of hula dance, usually when we think of hula dancers, we imagine ladies with long, sleek hair wearing grass skirts and coconut bras, gracefully swaying to the beat of traditional Hawaiian music. However, little do many people know, men have also engaged in hula throughout history, that is, until the Hawaiian renaissance in the 1970s when hula dancing was primarily widespread among women with very few men still engaging in the art.

During a 2009 Merrie Monarch kahiko competition, a group of muscular men proves that men’s hula is an incredible art, worthy of being revived. In fact, their performance is so powerful that it helped them win the competition!

In the footage of their on-stage performance, the group, known as Ke Kai O Kahiki, aren’t wearing your usual grass skirts, but rather, blue and red cloth skirts. The barefooted men are also wearing foliage wrapped around their ankles, head, neck, and wrists. While their attire may be a little different from the hula dancers we’re used to seeing, their outfits still exhibit traditional Hawaiian flair.

Rather than female hula dancers’ smooth, gentle moves, however, the men take on a more masculine approach with swifter and more vigorous moves, stomping, and chanting. Like their female dancer counterparts, the men still sway their hips and spin around in unison.

The many complex moves the male dancers make tells us that this group has been practicing the traditional hula dance for quite some time!

According to one commenter on the video, “Absolutely incredible. This is such an enriching way to celebrate masculinity, without competing or downgrading femininity. I am glad to see the Polynesian culture being embraced considering their years of oppression and censorship.”