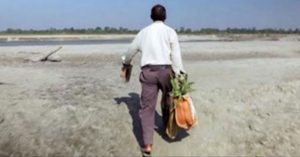 Some people may try, but there is no denying that the environmental health of the earth is in decline, and humans are 100% responsible for it. To further our interests, mostly monetary, we have destroyed much of the world’s forests, wild lands, and animal habitats. Despite the scientific knowledge presented by researchers and the obvious effects that climate change is already having on the world, we haven’t slowed the processes of destruction.

Animals continue to go extinct, glaciers are melting at an alarming rate, sea levels are rising, and weather patterns are becoming increasingly volatile. Few are doing anything to stop it, but one man, Jadav Payeng, is doing his part to reverse the effects.

Every day since 1979, Payeng has planted a tree on his home island of Majuli and the neighboring Jorhat. The islands were once covered in lush forest, but humans destroyed it. In 37 years, Payeng’s forest has begun to thrive and he has planted a 550-hectare area—larger than Central Park in New York City. The area is now home to 115 elephants, rhinoceroses, deer, and tigers, who otherwise would have no natural habitat.

Payeng hopes that even after he is gone, things will continue to improve on his island home. He has passed his love for nature and concern for the environment down to his own children who will carry on his very important mission.

“Man is responsible for global warming. Our education system doesn’t encourage kids to plant trees. The kids have only been encouraged to cut down trees, not to plant them,” Payeng says in the video below. “I’m growing old now but I am confident my sons will keep the forest alive. They are already in love with nature.”

Watch the video to see his astounding accomplishment, and please like and share with everyone you know.