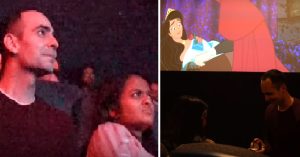 You only propose to your future spouse once. So when it came time for Filmmaker Lee Loechler to pop the question to his high school sweetheart, Sthuthi David, he knew he had to make it special.

No, Lee didn’t take his girlfriend to their city’s fanciest restaurant to get down on one knee or propose during an uber-romantic Paris rendezvous. Instead, he did it the way he knew best: via a homemade film! (Romantic, right?!)

For six months, Lee worked alongside Kayla Coombs to re-animate Sthuthi’s favorite Disney classic: Sleeping Beauty. In replacement of Princess Aurora “Briar Rose” and Prince Phillip, Lee had himself and Sthuthi animated into the film.

Once complete, his soon-to-be-fiancee’s mother rented out a screening room at the Coolidge Corner Theatre in the couple’s hometown, Brookline, Massachusetts, for December 30th. Both Sthuthi, who lives in and works as a doctor in Los Angeles, and Lee, who’s a medical resident at Charlottesville’s University of Virginia, would both be in town around that time for the holidays.

The goal was to use the animation alongside his proposal. Not only did Lee know the film would be the perfect way to propose, but he had already talked with Sthuthi to make sure the two were in a good place in their relationship to take things further. Now was Lee’s moment to shine!

But putting together the proposal wasn’t the easiest. Initially, Lee had difficulty finding an illustrator to help him execute the re-animation.

“A lot of illustrators said no, that it was too big, or they had too long of a waitlist, or that they had too much going on already.”

Fortunately, Kayla Coombs, who specializes in illustration and character design, was up for the job when Lee got in contact with her in April of 2019.

Finally finding the right illustrator was just part of the stress. The amount of time and work that went into the re-animation was more than the average person might imagine.

“Animation is so much work just for the few seconds you see on the screen,” Lee admitted.

To top it off, it took a tad bit of convincing to get the Coolidge Corner Theatre rented out for the scheduled day of the proposal, but luckily, they agreed.

“Lee’s proposal seemed too cool to pass up, and we were thrilled to be a part of it,” Mark Anastasio of the theatre said.

Even when the work was finished, and the screening room was reserved, there was still one problem: Lee didn’t want to invite Sthuthi to the showing, thinking it’d ruin the surprise.

“I knew if I invited her to a screening of ‘Sleeping Beauty’ that she’d know something was up,” Lee said.

So, Lee signed up for the theater’s e-mail list. After receiving a few e-mails which contained information on upcoming showings at the theater, he created a similar, fake e-mail list that included his re-animation of Sleeping Beauty. He then sent the e-mail to Sthuthi’s mother, who already knew about the plan. The mother then informed Sthuthi that she “bought tickets” for them to go see it, as well as a ticket for Lee “in case he wanted to go.”

“Much to my delight, [Sthuthi] called me a few days later and invited me to her own surprise proposal,” Lee said.

But one more thing needed to be done to not ruin the surprise: fill the theater.

Lee had a perfect idea: he took to Reddit to ask random people around the area to attend the fake screening. He mentioned that there would be free food and beverages served to celebrate the engagement.

The filmmaker also made sure that loved ones were hidden in the theater, so Sthuthi wouldn’t get suspicious.

“We put her friends and family in the way back and filled the space with people she wouldn’t recognize.”

Then it was showtime.

Sthuthi, who was comfy-casual in a pink sweater, was a bit confused when she first saw the characters. As a Disney enthusiast, she immediately noticed that the skin colors and facial features were different from usual.

Then as “Prince Lee” in the film pulled out a ring box and “threw it” out into the theater, Lee caught an actual ring box and got down on one knee to propose his real-life princess.

“I love you with my whole heart, including all of its ventricles, atriums, valves,” Lee said during the proposal. “She’s a cardiologist,” he clarified to the strangers in the room.

It turns out, all of Lee’s hard work over the course of months paid off. Sthuthi said yes!

It will be a moment to remember for both Lee and Sthuthi.

“At one point she looked at me with this doe-eyed look, and I will never forget the look on her face,” the now-engaged man said.

“It’s not every day you get to propose to your High School sweetheart,” Lee said in an Instagram post. “The only thing better than seeing the smartest person I know completely dumbfounded was knowing we’d get to live happily ever after together.”

If that isn’t true love, I don’t know what is. Weep (and laugh) at the proposal below!