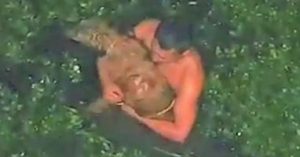 A cruel tale with a happy ending… police officers in Colombia heard the panicked barking and rushed over to a marshy wetland to find a dog struggling to stay above water. The poor dog’s hind legs had been tied up before she was thrown into the water to drown. But one of the officers immediately took action, stripping down to his underwear and jumping into the cold waters. After making his way to the anxious dog, he used a rubber tire as a floating device and a rope to hoist the dog to safety. [googlead]Although the dog had signs of hypothermia, the police officers had saved her just in time. And what happened to the dog and the hero that saved her? The officer adopted her and named her Juana!