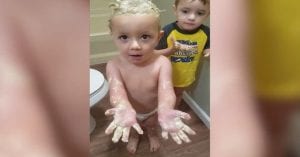 As they say, “Kids say/do the darndest things!” Although children often mean no harm, their lack of experience can land them in some pretty sticky (and funny) situations. Even when children do something their parents are not fond of, like place an electronic device in the toilet or intentionally paint the clean, white carpet with pink nail polish, sometimes parents just have to stop and have a good laugh for a moment or two!

Although a parent might have to punish a child for something they did to ensure they learn from their bad behavior, seeing some of the silly things children do honestly warms our heart and reminds us of the joys of being apart of a little one’s life.

In the footage below, two South Lyon, Michigan toddler boys, two-year-old Mason, and 3-year-old Jaxson, get themselves in trouble when their mom, Jodi Hargraves, spots them covered in butter from their head to their toes! Mom turned her head for a short moment to tend to dirty laundry while the two boys were watching a movie in their room. She then witnesses the big, buttery mess when her husband let her know he was going to be having a phone interview!

Although most parents would probably get their kiddos in trouble and then quickly take them to the bath or shower to clean them off, so they don’t track slippery butter throughout the entire home, this quick momma decides to record and post a video of her confronting her sons. Boy, are we glad she did!

“Why is there butter on your hands?” the mom asks Jaxson on the right.

“‘Cause I want pancakes!” he replies. How can you say no pancakes to this little cutie?!

While Jaxson was honest about why he and his brother were covered in butter, he lies by saying he placed the butter back in the refrigerator when he was done. Mason didn’t seem to get the memo that his brother was trying to lie their way out of getting worse in trouble, and he admits that the butter is in his room!

When the mom tries to get details about where in the room the butter is, little Mason simply says, “In my room.” When the mother asks, “Is it in your bed,” the little guy pauses for a bit before saying, “Yes.”

The best part of the video is when the mom asks Mason why he put butter in his hair, and he starts making a series of random sound effects as if he’s trying to distract her!

“I honestly didn’t know how to react,” admits Jodi after she posted the footage. However, it seems that she handled things pretty well: stern and authoritative yet not harsh. Plus, she gave us a humorous clip to watch!

The video below of the buttery boys getting caught by their mother will have you laughing! If you have children of your own, have you caught them in a similar fiasco?