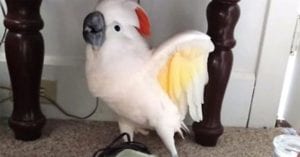 Pets can be incredibly smart animals, and over the months and years, they tend to pick up on your actions and words. Some dogs, for example, end up being accidentally trained to start barking and jumping when they see their dog food bag because they know what’s coming. They can make those type of connections themselves, without any training.

For example, I’ve got a couple of parakeets, and every night, we cover their entire cage so that they can get a good night’s rest in the dark. However, one of the birds, Echo, hates the cover. He starts making these chirping noises, which means he’s angry. Every time the cover is in his sight, the chirping begins. We obviously didn’t train him to do this. He just came to learn that the cover means it’s time for sleep.

In the video down below, Maxwell the Cockatoo has come to learn one thing that a lot of pets come to know. He knows when it’s time to go to the vet. His owner takes out his carrier and gets Max inside when it’s time for a visit to the vet. So, when Max sees said carrier, he goes a little crazy.

When his owner finally gives him the news, Max starts flapping his wings and talking. While you can’t really understand his words, he’s clearly protesting the visit. Hilariously, Max goes under this shelf and hides there. He bends his back and just stands there, speaking, and clearly in denial.

His owner says, “Max knows when he sees his carrier that it’s a visit to the vet and gets pretty vocal about it. Max is saying his own words that only he understands for the most part.”

Later in the video, it looks like he’s moved to the corner of the room, under a table. Meanwhile. His owner tries to coax him out and tells him he has to get into his carrier and go to the vet. Max just continues to interrupt his owner with a tantrum, and lots of screaming. It’s hilarious!

“The only things I know he is saying is, ‘I don’t wanna,’ and ‘What did I say,’” says his owner. “He is actually a very happy and loving bird, but like any kid, he needs to express himself every now and then.”

To watch Max’s hysterical reaction to finding out he’s going to the vet, watch the video below!