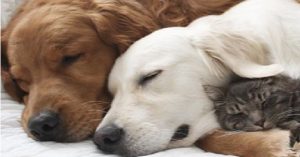 Besides being known for retrieving shot waterfowl, golden retrievers are a breed loved for their playfulness, gentle behavior, and friendly attitude. Golden retrievers’ traits make them great companions for small children. Also due to their calm personality, these canines are commonly trained as therapy pets for those dealing with anxiety, panic, or overstimulation.

So when Jenny Medrano adopted Watson, a blonde golden retriever, she knew he would be a great dog. Watson’s particularly easy-going personality is the perfect addition to the family, and companion for Kiko, their current golden retriever.

Unlike Watson, Kiko is a little more on the anxious side and occasionally deals with what Mom considers to be bouts of depression. But the moment Kiko met Watson, he began to calm down and exhibit an improved mood. The golden retriever pals can be seen cuddling, going on adventures in the wilderness, and cheesing for the camera together. They’re the perfect complement for one another!

Then in September of 2015, Jenny added yet again another furry friend to the household: Harry the cat. While cats are usually more independent and less social than their canine counterparts, Harry is different. According to Mom, “Harry is not like other cats. He loves dogs and he has so much patience. He loves to cuddle and thinks he is a tiny puppy.” 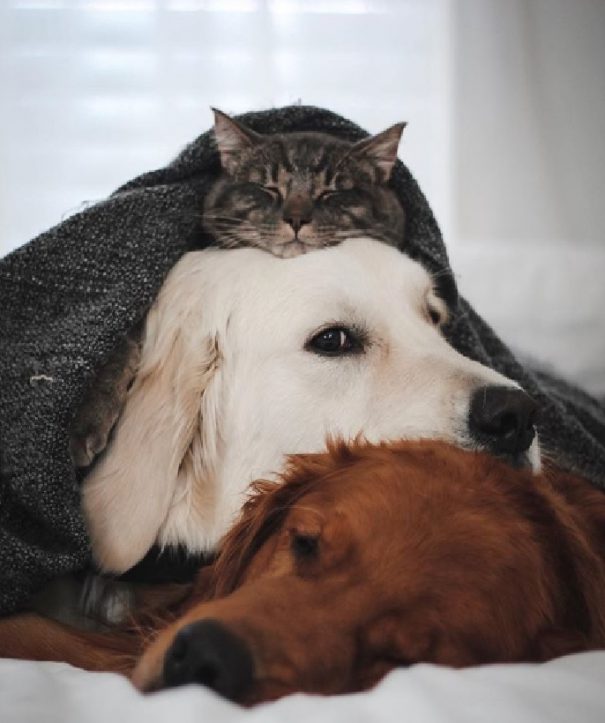 Although Harry can be a bit moody at times, Watson’s peacefulness makes him feel more at home. Harry and Watson, and sometimes the addition of Kiko, have been witnessed cuddling together from time to time!

If you thought the family was complete, you’re wrong. Jenny decided to add another critter to her little family: a female, beanie-wearing hedgehog named London. Like the rest of the gang, London found peace in Watson’s presence. While London might be a little prickly, there’s no doubt that she loves to indulge in some Watson cuddle sessions! 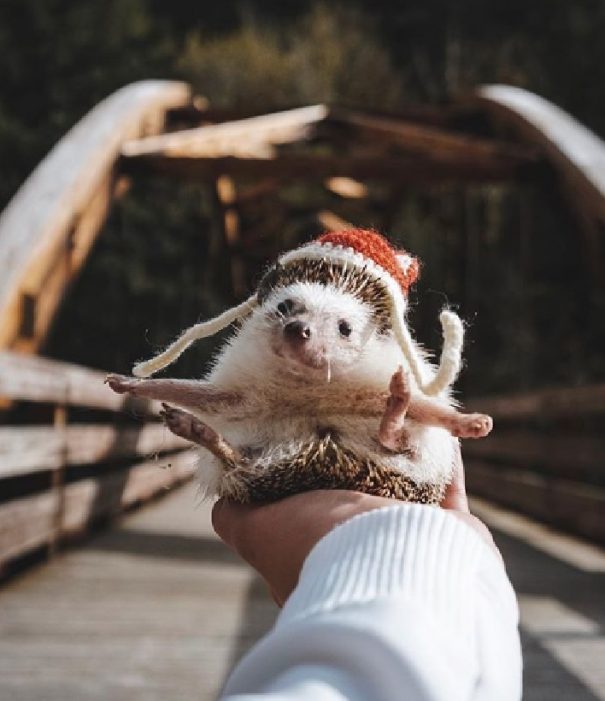 So now, Jenny’s family of critters includes Watson, Kiko, Harry, and little London. Two dogs, a cat, and a hedgehog might seem like a weird combination, but it definitely works! I’d like to think that it’s all because of Watson’s personality that helps bring everyone together.

While they seem like the perfect family, there’s some bad news. According to Jenny via Watson and Kiko’s Instagram page, Kiko has been in the process of battling cancer with chemo. However, with Watson’s loving, loyal, and relaxed temperament, we’re positive that he will be the perfect companion for Kiko through his difficult time. And so far, he’s been very supportive and never left his side.

As they say, a family that sticks together stays together!

Watch the following video to see how Watson helps calm down Kiko while he recovers.