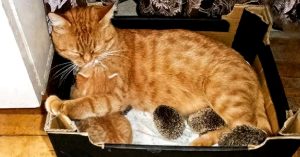 There’s not much that melts my heart more than an animal who chooses to care for another animal’s babies, let alone, the babies of another species. It might be in an animal’s instincts to act as a mother figure for their own babies, but for ones that are not their own? I’d say that’s pure selflessness.

Maybe you’ve heard stories about a dog caring for puppies from another dog or even a cat caring for an abandoned puppy. However, a mother cat caring for baby hedgehogs isn’t something you really hear about!

Sonya the orange cat is an example of that. Years ago when she gave birth to her own kittens, she immediately accepted a quad of orphaned baby hedgehogs (hoglets). Although the four prickly hoglets seemed like an inappropriate match for Sonya and her tiny fur babies, they all actually got along very well.

In a series of photos taken by Sonya’s owner (which can be viewed in the video at the end of this article), we witness the adorable hoglet-feline family enjoying one another’s company in harmony. The young hedgehogs can be seen snuggling with Sonya’s kittens and, at times, crawling over their foster mom. Sonya has even breastfed the adorable hogs on multiple occasions to ensure they grow up to be big and strong!

Although there’s no doubt that Sonya’s situation is pretty unique, she’s not the only cat out there who has fostered hoglets. Musya the cat also happily cared for a litter of hoglets (eight, to be exact), whose birth mother was killed in an accident. Like with Sonya, Musya instantly welcomed the hogs into her little family! It’s like both kitties automatically knew the needled critters needed a source of food, warmth, a helping paw, and a watchful eye.

Viewers not only find both Sonya and Musya’s mixed families absolutely adorable, but they find significance in these instances.

“While we are of the same species and fighting amongst the same species over skin color and birth circumstances, the cat here has adopted and shown love to a different species than her own. A lesson to be learnt here,” one person said after watching Musya care for her octuplets.

That commenter couldn’t have put it any better. If our fellow animal community can be so willing to care for other animal species who differ a great deal from them, we can be accepting of other homo sapiens whose characteristics are all quite similar to our own.

Check out Sonya the cat and her tiny hoglets below.