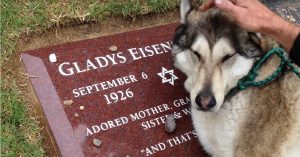 Mourning the loss of someone we love is essential. While some try to stay strong and not cry after the passing of a person or pet they care about, taking the time to properly mourn and reminisce the positive memories of the individual lost helps one mentally and emotionally transition into life without that person or pet.

For a wolf-dog named Wiley, he certainly missed his human grandma, Gladys Eisenstat. Although she lived a long life, living up to the age of 85, there’s no doubt that her loved ones, including Wiley, would be missing her terribly.

Because of the strong bond Wiley had with Grandma Gladys, his owners decided to take him to her gravesite at Mount Sinai Memorial Park in Los Angeles one day to give him the opportunity to properly mourn. While some might think that a dog wouldn’t care to visit a grave, let alone understand the meaning behind a grave, Wiley’s reaction stunned everyone.

In a viral video of the dog, which has earned more than nine million views, Wiley is seen breathing heavily with squinty eyes as he’s lying on Gladys’s grave. The poor guy is all choked up over the loss of Grandma!

“We miss her too,” Mom says while Dad pets Wiley to calm him down.

Although Wiley’s reaction is convenient given the location (i.e., Grandma’s gravesite), some suggest that the dog isn’t crying but that he’s possibly reverse sneezing, but his owner, who certainly knows the dog better than video viewers behind a screen, has a different perspective.

“I am not a vet so I can’t say if he’s reverse sneezing…I can tell you that he has never done that before and hasn’t done it since. I may be anthropomorphizing his actions but its how I’m choosing to deal with loss…” says Sarah Varley in the description of the video.

Based on the information Varley gave, it’s a possibility that Wiley really was in a state of mourning rather than having a respiratory event! And according to a veterinarian, the dog is doing just fine.

In fact, not only does Wiley show strong emotion at the grave of Gladys, but he is generally a sensitive and emotional fella. He currently resides at the Lockwood Animal Rescue Center amongst other wolf-dogs. There, the furry friend is apart of a program where he will help war veterans struggling with PTSD, which is perfect for him as he has a strong emotional connection to humans!

Make sure to watch and share Wiley’s video below.