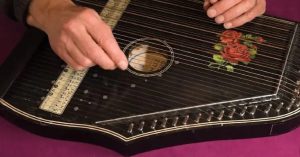 Everyone has a favorite song. Although, there are certain songs that are more popular among avid music lovers than others. “The Sound of Silence,” originally sung by Simon & Garfunkel in 1964, would be one of those songs.

If you’re a fan of this song, there’s a possibility you’ve listened to numerous renditions already. The Disturbed, the Abbasi Brothers, Model M, Carmen McRae, Bobaflex, and Derek Webb and Sandra McCracken have all covered the song. But I’m almost positive that you have never heard the song played on a 5-chord zither!

What exactly is a zither? It’s a stringed instrument similar to a guitar featuring mores strings, a different body shape, and less surface area. And, unlike your average guitar, it is played while the instrument is placed horizontally on a flat surface or across the musician’s knees.

Using this unique and rarely-heard-of instrument, French musician and instructor, Etienne de Lavaulx, recreated an enchanting rendition of the Simon & Garfunkel classic. The Melbourne, Australia resident struck each string with such precision to produce his beautiful, aural masterpiece!

“This arrangement of Simon and Garfunkel’s hit is played on a 5-chord zither made in East Germany sometimes during the 60s or 70s. It has single melody strings. Both single and double melody strings instruments are played exactly the same way. On a zither with double melody strings, both strings are tuned in unison,” it said in the description of de Lavaulx’s acoustic cover.

Listeners were immediately amazed to hear the musician’s work.

“What a beautiful piece of music to discover and wake up to. I’ve heard of a Zither but never seen let alone heard one. Pure delight to hear. Thanks for posting this!” one person said.

“Usually I am critical of attempts to cover this song, but this is incredible. I recently finished reading The Hobbit and Lord of the Rings (for about the 50th time – every year since I discovered it age 15) and can imagine music like this being played in Rivendell,” someone else posted.

de Lavaulx first learned how to play the chord-zither back in 1973. He always loved playing his instrument for people at concerts, shows, and music festivals around his place of residence. To see, hear, and even learn about such an instrument was shocking for most people he has ever come in contact with!

Apart from playing the chord-zither, de Lavaulx can also play the classical guitar. With his long experience playing both instruments, de Lavaulx’s music career has led him to release several albums, perform at various venues, and offer private lessons. You can learn more about him and listen to samples of more of his music from his website.

Before scoping his website, make sure to listen to his “The Sound Of Silence” cover!