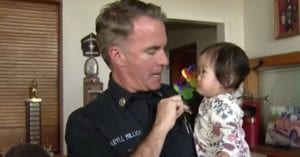 One of the hardest and bravest things a mother can do is admit when she needs help with her newborn. Initially, she may have the impression that because it’s her baby, she must be 100 percent willing to do everything to care for him or her without anyone’s assistance. However, mothers should not have to do it alone. Asking for someone’s aid can be one of the best things they can do for themselves and their child.

Besides asking someone to provide a helping hand when it comes to changing their little one’s diaper, feeding them, or babysitting them for the day, it’s important that if a mother feels she is unable to provide the proper long-term care for her baby that she considers putting her baby up for adoption. This decision isn’t easy, but it can be the right decision in multiple scenarios.

One particular mother in Santa Ana, California decided that giving up her child was the best choice. 15 hours after giving birth, the woman arrived at the Station 75 fire department, telling Capt. Daryll Milliot, “I need to give you my baby” as he opened the front door to the building.

Milliot agreed to the woman’s request and took in the newborn, the first baby that had been surrendered to a fire station in all of Orange County. Milliot told the three other firefighters on duty – Tyler Green, Michael de Leon, and Shawn Stacy – about the baby.

At first, de Leon was shocked about the incident. “The first thing that comes to your mind is, ‘How can you surrender your baby?’ But then, when you really think about what happened, it’s really heroic and brave to do it,” he says.

In response, the four men decided they would do everything in their power to care for the child temporarily. Although a California social worker would soon pick up the newborn, the four men fell in love with her. They named the girl Naomi and even started calling themselves her “uncles.”

According to de Leon, “We did our best to compose ourselves, maintain professionalism and do what we needed to do.”

Not long later, Naomi was given a pair of lovely parents, Krysten and Kurt Snyder, who had been longing for another child. Not only does sweet Naomi now have parents but also an older brother as well as her four firefighter uncles who she made a permanent impact on.

Although she will be too young to remember her encounter with the firefighters, we hope Naomi will be able to have long-term contact with her four “uncles” as she gets older. They all definitely touched each other’s lives.

“This is one of the few things in my 25 years of being a fireman that it’s just the greatest ending of the story,” says Milliot.

What a sweet, positive story. Learn more about little Naomi’s experience in the video below!