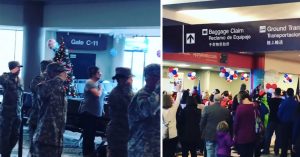 For many of us, the hustle and bustle of the airport is stressful. Everyone seems to always be on the run as they rush through security and then head off to check in at the correct gate before their plan takes off. You probably know the drill.

But, at an airport in Nashville, an announcement on the overhead speaker had dozens of people stop where they were for several moments without saying a peep. The hustle and bustle of the airport halted, heads dropped, hands were on hearts, and tears were shed.

While the initial announcement wasn’t caught on the Facebook-posted clip, I’ll fill you in. The airport had announced to everyone that children a part of the Snowball Express were present at the airport. These are children who had a military parent never return home after duty. Snowball Express aims to serve the children and families of fallen soldiers.

As one could imagine, those a part of Snowball Express go through trauma and grief following the passing of their loved one. However, the Nashville airport made sure the Snowball Express children would be properly honored.

With red, white, and blue balloons decorating the airport, saluting soldiers lined up, and everyone at the airport stopped; they were silent to show their respect as ‘The Star-Spangled Banner’ played over the speakers, there was no better way to honor the families of fallen soldiers as they boarded the plane.

Jen Tringale, the person who filmed the National Anthem at the Nashville airport that day, posted this message on her Facebook:

“When they announced [the children of Snowball Express] over the loudspeaker and they lined up to board the plane the whole airport literally stopped and sang the national anthem with the military presence in salute. Almost every person standing around, myself included was bawling at the sight of these kids and spouses who have paid so great a price for our country. To see all of this at Christmas time was so humbling. Seeing the general public in an airport stand still to honor these kids was simply beautiful.”

Later in an e-mail, she sent to ABC7, Jen stated, “I’ll never forget it myself, witnessing an unannounced standstill like that by the general public – out of honor.”

Watch the video below to listen to the National Anthem being sung over the overhead announcement at the airport! You’ll have shivers down your spine and tears streaming down your face.

Show support for your fellow soldiers, veterans, fallen soldiers, and their families by sharing the clip!