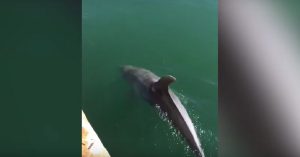 We may not see it with our own eyes, but modern civilization has had a major impact on the animal kingdom. Many animals are forced to relocate as we destroy their habitats to build our own homes. Just the heavy population density of humans alone is enough to drive timid animals out of their original homeland. But even if wild animals were okay with closely residing near us, they’d have a difficult time finding sources of food, shelter, and mates. Not to mention, they’d have to face different challenges, such as making sure they don’t get hit by a car or exposed to pesticides that many of us use on our lawns.

In Venice, Italy, it became clear that wildlife is, in fact, being driven out by us. As Venetians were self-confined during the Coronavirus, locals started to notice the sight of new wildlife and changes to the general ecosystem around the city.

“The water is blue and clear,” said Gloria Beggiato, the owner of the Metropole Hotel, which is in close proximity to the Venetian Lagoon. “It is calm like a pond because there are no more waves caused by motorized boats transporting day-tripper tourists. And of course, the giant cruise ships have disappeared.”

The resident even noticed a bizarre sign posted in public.

“Someone has put up a sign saying, ‘Don’t tread on the duck eggs.’ All totally unimaginable a while ago,” she continued.

One local fisherman named Franco Folin even said he wouldn’t be surprised to see a surplus of fish swimming in the Venice Lagoon after during everyone’s quarantines.

“For the moment I am not going out fishing as all the restaurants I supply have closed, so what is the point?” he said. “But when this all over, we may well see more fish returning because for the moment pleasure fishing is prohibited – there will be an awful lot of extra marine life in the lagoon.”

Folin believes there’s a reason why the fish population is being driven out: because of the high traffic of motorboat taxis and tourist boats zipping through the city’s waters.

“For goodness sake, it is not surprising there are fish in the canals of Venice. If there were not, then we should all be worried as the lagoon here is a fragile ecosystem. People need to realise that if we control and cut down boat traffic in Venice and its lagoon then we could all discover a unique biosphere.”

Many Venetians such as Beggiato are excited that nature is now returning.

“We Venetians have the feeling that nature has returned and is taking back possession of the city,” said Beggiato. “If you ask me today – sunny blue skies, clear canals – then, yes, we would all like Venice to stay like this for a while. But we need, and look forward to, the return of tourists, though maybe not the 20 million a year that we have had to cope with.

And, although Venice financially relies heavily on tourism, Beggiato hopes that this entire situation will help the city find an equilibrium to ensure the safety of the returned wildlife.

“I honestly believe we should take the opportunity of this lockdown to reflect and see how we can be more organized in the future to find a balance between the city and tourism.”

All in all, this is great news! See nature restore itself in Venice by watching the following video.