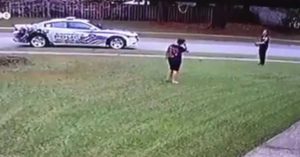 Throwing a ball by yourself is like talking to a post. Just like in a conversation you need feedback, even when you throw a ball there should be someone on the receiving end. If there’s no one there, it’s a pretty boring game that just feels empty. A parent or pack of friends definitely make this life lesson more fun. But, what happens when there’s no one around to play with you? It gets pretty lonely.

This video is a clip of surveillance footage taken outside a home in Summerville, South Carolina, USA. It’s of a boy playing with a football, barefoot, on the front lawn. He’s playing all by himself. Then, a cop car pulls up. The boy and Officer T. Bilancione exchange a few words after getting a little acquainted and the officer puts his car in park.

Next thing we see is Officer Bilancione walking onto the lawn where he picks up the ball and starts playing with the boy! The two appear to just be throwing the football around just like they’ve done a million times before. And it was all caught on camera. It’s so sweet of the officer to take a few minutes out of his busy day to spend time with a little boy, and the kind gesture didn’t go unnoticed. The boy’s parents wrote to the Summerville Police Department and other media sources to share their delight.

“My son was throwing the football up to himself in the yard,” explained the boy’s father, “and your officer noticed and stopped to play for a couple minutes.” The grateful dad added, “this made my son’s day.” The child’s father also told Officer Bilancione that “he rocks.”

Well, social media is going bonkers over it, garnering thousands of views and kind comments. Even the Summerville Police Department wrote a nice comment to the kind cop on their Facebook page: “We would like to throw a shout out to one of our outstanding Police Officers, FTO. T. Bilancione, who was captured on the surveillance camera outside of a resident’s home tossing the football with a boy.”

Click on the video below to watch this small gesture go a long way with the boy, his parents, and the community.