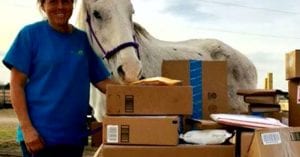 Many of us have heard heartwarming stories about animals lucky enough to avoid getting put to sleep at the last minute. For example, most of us have heard about a dog in an animal shelter about ready to be euthanized, that is, until someone finally comes in to adopt him just moments beforehand. Stories like these may be sad, but nevertheless, they have a happy ending that leaves us feeling overwhelmed with gratefulness.

Something quite similar happened to an old horse by the name of Bubbles. From frostbitten ears to achy joints that prevented him from moving as quickly as he once could, Bubbles was at a lot waiting to be sent to Mexico to be slaughtered. However, the horse did something very interesting to stage his own rescue: hide between a group of donkeys.

Sue Chapman and Lari McConegly from Becky’s Hope Horse Rescue were witnesses of the incident. In fact, the two ladies spotted Bubbles weaving in and out of several miniature donkeys that they were there to save. Chapman and McCongely, of course, felt compelled to save Bubbles as well. How could they leave him behind?!

“I firmly believe that he thought if he mixed in with the mini donkeys, we wouldn’t notice. ‘I’m just one of them, you don’t see me,'” Chapman states.

Either way, it doesn’t seem like a coincidence! It just wasn’t Bubbles’s time.

“BUBBLES!! A story to warm your heart! When we went to bail the mini donkeys from the kill lot, this skinny, grey gelding walked straight up to our trailer, pass the gates, disregarding the commands of the kill lot employees. He was intent that this was his ride out of there…

Thanks to your overwhelming generosity, we had just enough money left over to pay his bail. This sweet, old man won our hearts the minute he decided it was the perfect time to escape the kill lot. It seems that he thought nobody would notice him escaping if he simply mixed in with the mini donkeys!”

Becky’s Hope also mentioned that Bubbles the horse remains safe and sound at their rescue center and still continues to hang out with his donkey friends.

But that’s not the only good news we can derive from this story; Bubbles also received quite a fanbase! From around the world, the horse has been receiving all kinds of fan mail, including items off of the sanctuary’s Amazon wishlist. The packages help not just Bubbles but also the rest of his beloved animal friends at the center.

Although it breaks our hearts to hear that Bubbles was so close to not being here today, it’s amazing to know that he not only has a great life now but has helped non-profit Becky’s Hope Horse Rescue better provide for their animals thanks to his stardom.

Learn more about Bubbles’s rescue in the video below. What an empowering story!