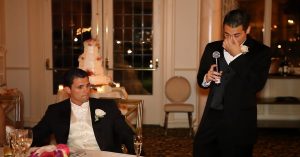 For women and men alike, weddings and other major events are great for making heartfelt confessions. As each of us advances into the next stage of our lives, there are a lot of bittersweet emotions running through everyone involved. Thus, there is no better time to be candid about the way you truly feel toward those that mean the most to you.

At one wedding, the groom’s younger brother and best man, Anthony, made one of the most emotional wedding speeches featuring both humor and good ole brotherly love. In the beginning, the speech is fairly typical of a best man. However, as the speech progresses, so do his confessions.

Towards the beginning of the video, the groom’s brother starts his speech off with something heart-touching yet comedic: “There comes a time in everyone’s life when they meet their one true love, their soul mate, the person that’s going to know and love them for the rest of their life. That moment came for George 25 years ago when he met me.”

Anthony continues with the humor in his speech as every brother and best man should do to help balance the overpowering emotions felt by the wedding guests. His witty comments alone make the wedding reception entertaining!

One of my favorite parts is when Anthony compares himself to George: “…growing up, George and I were polar opposites. He was smart and driven, I was the funny goofball. He was athletic, I was and still am incredibly good-looking.” Not surprisingly, Anthony then mentions that because of their very different personalities, he and George would fight a lot growing up.

Not much later into the speech, Anthony talks about first meeting Nicole, George’s new wife, and what his first impressions of her were. Then come the confessions…

Anthony admits that since George and Nicole have been dating, he’s grown closer to his brother. In fact, they began to fight less. “After George and I graduated college, we got closer. We still fought, but we hung out a lot more often as well. …[George and Nicole] would invite me to tag along [on their dates], and neither one of them ever made me feel like a third wheel,” admitted Anthony.

While typically, friendships sometimes break off or loosen up as a couple grows closer to one another, for George and Anthony, their bond only strengthened from the time George began dating his now-wife to the time that he married her.

Every word Anthony said in his speech took a lot of nerve but nevertheless was perfect in every way possible.

To hear the whole speech, watch the video below. You’ll laugh and shed tears at the same time!